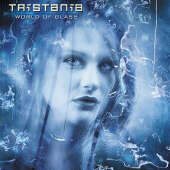 This is my first real introduction to the world of Tristania, and it comes through in their latest album “World of Glass”. Tristania for those of you who do not know is a seven member gothic metal band from the icy reaches of Norway.

If gothic metal is a mongrel breed of death vocals, black keyboard sections, power metal crunchy guitars and female vocals not unlike Tarja from Nightwish or Ihriel from Peccatum, then Tristania fit this ‘gothic metal’ bill to a tee.

I think what makes this Tristania album so special to me is the seamless transition from harsh, melodic death metal (ala Soilwork) to beautiful folk driven acoustic/string passages with gorgeous female operatic vocals (not unlike some sections in the “Last of the Mohicans” soundtrack). However, while the female vocals are special, Tristania would truly be a one-dimensional band if they did not have some grunty bloke vocals. The clean vocals are not unlike early Garm, except more polished and the death vocals are reminiscent of Jonas Renske (Katatonia) when he used to take the harsh style.

There is not a stinker amongst these ten tracks, which in itself should let you know this album is good, but the real gem comes in that all tracks are not only good but absolutely great, this is a bloody quality album.

My favourite tracks on “World of Glass” are ‘The Shining Path’ which (at about 1:52) kicks into some seriously Gothenburg style death riffing, and doesn’t slow down for another five minutes. Brilliant.

Bottom Line: Nothing wrong in this release, without splitting hairs, crossbreed combination of the main genres and then a few twists. Spot on.