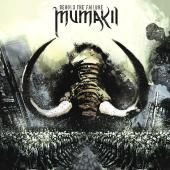 For whatever reason, this album burns in my memory, because I remember seeing it on banner ads a lot while I was scoring various random metal sites.I guess the fact that I’m reviewing this (and bought it on a whim when I saw it used) is a sign that advertising works in subtle and insidious ways?

Something called “blastcore” is going to appeal a shitload to someone like me, a lover of speedfreak extreme metal. The band’s self-appointed style distinction actually makes sense when you hear this: Behold the Failure Is full of half-blasts, full blasts, crazy rolls and gravity blasts, but this doesn’t have the thin, shrill veneer of grindcore, despite the spirited punk influences in some of the bouncier riffs and the punchy, brief arrangements. The Relapse-funded beefy production and the band’s affinity for crunchy, Nasum-esque Eurogrind grooves brings to mind death metal-adjacent influences…but “deathgrind” doesn’t feel like a great fit, even though it’s probably the closest existing subgenre. The speed can still be blinding, but there’s an understated dexterity in the guitars that makes the full package a very tight, focused assault compared to grind’s usual looseness. To put it in the most succinct way I can, this is written like a grindcore album, but the end results doesn’t really grind, it’s just a handful of chunky blastbeat grooves. All twenty-seven songs are short explosions that get shit into your ears at a machine-gun pace and that’s it. There’s no slow closer, no weird ambiance, the only thing that could be considered a sudden diversion is that one part in “Useless Fucks” where the vocalist goes “YEEEEEEE” and sounds like a rooster.

As you might expect, it’s sometimes hard to get though a full run-through of this, but the snack-sized songs make it easy to rip a few whenever you’re on the go and just need your brain scrambled with heavy fuckin’ noise for a few minutes. This spends literally zero seconds meandering, and they know how to get whimsical with it and add a bit of fun, but the grooves are always done with tasteful artistry and always have more activity than some of the more smooth-brained hardcore out there. It’s hard to knock this a ton when it’s a ton of fun, albeit only in short bursts before it gets too overstimulating.