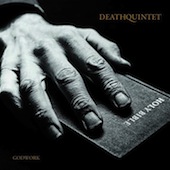 Type: Full-Length
Release Date: 2013
Label: Self Released
Genre: Death
1 For The Love
2 Broken Hands
3 Crawl On Your Feet
4 My Burden
5 As The Canvas Frays
6 Cross My Heart
7 Nothing
8 Standing Outside All
9 Let Us Die Together
10 Alfa & Omega
MetalBite on YouTube

Swedish death metal is known all over the world as the benchmark for 90% of the death metal community. Completely uncompromising, for the most of the bands that have appeared – visionary… Sweden does live up to its own hype and more. Deathquintet appears on the shores of metal, waiting to unload its sonic destruction to the world.

This five piece act explodes out of the CD with some brutal power and rawness. Mostly giving some new death metal style with heavy shading of older death with even some hardcore elements, they seem to be trying to be on the fast track of being the next benchmark thing in the genre - yet for all of that hype and musical power, it seems the old adage remains intact… appearances, like expectations, are greatly deceiving.

With twelve songs came twelve solid chances Deathquintet had to grab someone by the throat and beat them senseless… that became many disappointments. Some tracks were more than just good, but not really great – relying on fury rather than talent. "Crawl On Your Feet" and "Nothing" were the only good tracks offered here, but the rest seem to be just cheap filler quick written crap of music that was going nowhere fuckin’ fast.

I was expecting so much more from this band, but I never got even a small percentage of it. Deathquintet seem to have talent behind everything, but it is never seen on this recording. I expect the band to make one more album and I hope that it is better conceived and planned than this one turned out to be. Naming your album Godwork makes the task of living up to it all hard, but Deathquintet never gets even remotely close to actually doing it.

I came, I listened, I am completely disappointed and now I move on. Says it all the best.