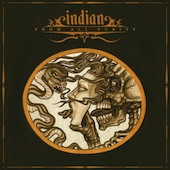 From All Purity is the fifth full length from Chicago's blackened sludge/doom masters Indian. After releasing their first three full lengths on Seventh Rule Recordings, the band signed to Relapse Records and released their fourth LP Guiltless in 2011. That was a breakthrough album for them. Indian did not rest on the critical success of Guiltless, the forth coming LP see's them refining their sound and this may very well be their best album to date.

The opening track of an album should give you a feeling of what you are about to experience and "Rape" does that successfully. It's slow muddy (in a good way) guitar sound buzzes like a hive of angry bees, while the drums and bass pound away at a two beats per minute pace. This is slow folks and so very heavy. The vocals are of the black metal variety, sickening, painful screams that "rape" your ears. Another highlight of the album is "Rhetoric of No". Right from the start the tortured vocals bring out all the anguish and despair. The song starts off a little uptempo but gradually descends in to slow grinding bliss. As it drones on, effects enter the mix to add atmosphere to song. The album closer "Disambiguation" is the albums best track. Again, slow as can be, more on the doom side of the fence as opposed to the sludge sound that most of the album has. A slight bit of melody can be heard here as well.

Indian is making a statement with From All Purity. Their minimalist approach makes this one heavy album. They have a solid grasp on their sound. This is a very cohesive effort. The vocals are absolutely brilliant and the highlight here. The screaming blacked style makes every tune sound so desperate, as doom metal should be. With the release of From All Purity coming at the end of January, this is one of the first must have albums of 2014.