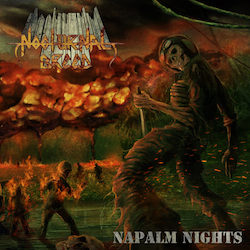 I confess that Nocturnal Breed had lost relevance for me after No Retreat.... No Surrender. But the sharp-edged riffs of 'Sharks Of The Wehrmacht' from the still current We Only Came For The Violence album reanimated my interest in the Norwegians, who in turn seem to have a strong interest in the history of my country. Well, actually only in 12 years of it. Napalm Nights also deals with a topic from the Nazi era and turns Ilse Koch, the witch of Buchenwald, into the 'Bitch Of Buchenwald'. The camp commandant's wife came from a working-class family in Dresden and obviously had a sadistic streak, even if the horror story taken up by Nocturnal Breed, that she had set up lampshades made of Jews' skin in her house, belongs in the realm of propaganda. Nevertheless, she was - rightly - put on trial after the war. Twice, in fact; after the Americans had first screwed everything up, a German court followed afterwards.

But actually, this is not supposed to be about Ilse, but about Nocturnal Breed. Napalm Nights has an appropriately dirty sound that could be a bit more powerful. Nevertheless, it reflects the dark mood of the album very well. Musically, Nocturnal Breed do not lack vitality and aggression. However, they also allow for surprisingly wistful tones. 'Cursed Beyond Recognition', a real highlight on Napalm Nights, surprises with melodic solos, well-tempered melodies and some creepy parts. In addition, the singer sprinkles a few grains of madness, while in other tracks he sometimes strikes a Lemmy-like key. Last but not least, he manages the high-pitched screams as well. The chorus of the title track proves evidence in this regard – moreover, it holds some casual parts, but the playtime of more than twelve minutes remains a dubious decision. Neither intensity nor compactness achieve the highest degree, but it is still a solid song.

Nocturnal Breed focus on ugliness. The hidden cover of the digipak’s booklet demonstrates this and the music, of course, also does not display any sign of beauty. Thrash is the dominating partner on this blackened thrash work, because it’s mainly the use of well-hung riffs that characterizes Napalm Nights. The beginning of 'Under The Whip' almost sounds like the riff of a power or traditional metal unit. Nevertheless, the record does not suffer from a heterogeneous overall impression and it shines with a strong ending. Both the archaic 'Krigshisser(D.N.K.)' (D.N.K. stands for Den Norske Kommando) and the with mean thrash riffs equipped 'Dragging The Priests' with its cynical end add value to the catalogue of the Norwegians.

Finally, let’s get back to Ilse Koch, not only because of the fact that 'Speedkrieg' with its title and some German words in the intro (see the headline of this review) build a connection between Nocturnal Breed and the darkest time of the 20th century. Ilse Koch committed suicide in prison in 1967. Even her actually innocent oldest son could not bear his mother's guilt and her completely ruined reputation. He also took his own life in the same year. Once again we learn that the criminal regime of evil Adolf ended in 1945, but its horrible impact lasted much longer. One of them is writing a pretty good piece like the fluid, catchy 'The Bitch Of Buchenwald'. Nevertheless, on a global scale the negative effects far outweigh... but on Napalm Nights the positive elements keep the upper hand. It's a strong record from a reliable horde.