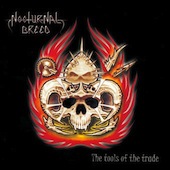 I have no idea why a band from the relatively extreme area of metal exactly plays a W.A.S.P. song. Aggravating the situation, Nocturnal Breed does not give the piece ("Ballcrusher") its own touch. Isn't that a little embarrassing? Normally I would say that this is equivalent to a creative declaration of bankruptcy. But our filthy friends from the fjords also blast 14 of their own pieces among the people on Tools Of The Trade. Therefore, one cannot speak of a lack of creativity.

Whereby, maybe I have to correct myself. 'Down By Law' is considered a song in its own right, but it's almost exactly like another thrash metal track. I guess some people know a band from the USA that lost the ability to create perfect albums in 1987. Shortly before that, however, they wrote the most famous thrasher of all time, something with "Angel" and "Death". 'Down By Law' copies the riff, tempo and pauses in the vocals and only takes its own turn in the chorus. Pretty cheeky, but what the hell. Nevertheless, Tools Of The Trade offers a lot of good and mostly own ideas. Unfortunately the musical material struggles with its technical realisation. Don’t expect a clear mix like that one of their latest album We Only Came For The Violence. Instead, Tools Of The Trade sounds mean and dirty, but also quite dull and nearly flat. That's no drama, but it does cost a few percentage points.

However, after a rather unspectacular start, the first peaks soon follow with 'Resistance Is Futile' and the vile title track. Lead singer S.A. Destroyer, who, according to the band's pictures, astonishingly wore a Corona protective mask already in 2000, nags at the guitars, which either play rapidly or create a somewhat morbid mood. Not every piece is convincing all along the line. 'Skeletor Of Sin', for example, remains colourless despite its high speed. Now, of course, the good advice can come again not to release 15 songs with 66 minutes playing time, but to leave out two or three tracks. If only one knew which ones! So let's take the album as it is, because even if not every track is a hit, none is a nuisance.

'Motörmouth', which does not pay a musical tribute to Lemmy (R.I.P.) and his institution, marks the last gem. Nocturnal Breed open the doors to their stinking niche of hell for the final time and drag the listener skilfully into ruin. Surely, Tools Of The Trade has never reached the status of a black thrash masterpiece and more than 20 years after its release, it is certainly too late to change this situation. Yet the record reflects the proper insidiousness of the hybrid style and holds a lot of good songs. Needless to say that fans of Aura Noir, Deathhammer or Inculter will enjoy this program.