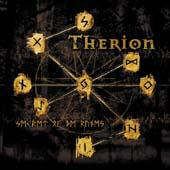 I write reviews for you, readers, all reviewers do. Now imagine a scenario in which Universal Studios invited a film reviewer to a sneak preview of their latest masterpiece, expecting that the person spend his time reviewing the movie for his readers. Now imagine that Universal decided that they didn’t want anyone to give away the ending before the film’s release, so they decided to cut out the last third of the film. It’s that last third that ties everything together and makes it the great work that it is, so I ask, to whom is the disservice being done?

The readers, the consumers, and then it topples from there, hurting the actors in the film, the producers of the film and ultimately the film studio. What in the living hell does all this nonsense have to do with Therion’s latest? Have you guessed it yet?

That’s right, someone decided that it would be a bright idea to do exactly that by sending out promo copies for us reviewers that only have part of each song on it, touting the watered-down moniker of “faded version.”

It should be called “cut off in the middle so you can’t hear the rest of the goddamned song and then we might be safe from the evil mp3 pirates until the full version is released version.”

But I must lend my apologies, because I did forget to mention that there are indeed two full-version songs. But, then again, I don’t review singles, so here’s what I have to guess about the album:

From all that I heard, I’d say this leaf doesn’t fall far from the Therion tree. I didn’t really hear all that much new stuff in it, but then, Therion’s classical metal brand has a uniqueness all it’s own.

Strangely enough, and maybe it has something to do with this being the “faded version”, this album seems like it’s lacking a little on the sound quality production end.

The music is tight. These guys are together and are professional; they probably will pump out some great finales or something on the full version, but in truth, I'm not wearing my soothsayer hat right now.

The feeling you get from the music is strong and triumphant, but great triumphs come with climactic endings, to which I don’t have access. So, if it does, it’s probably damn good, if not, it really renders much of this disc mediocre.

Bottom Line: Give me a full album and you’ll get a full review. Don't be surprised if promos like these get banned from Metalbite.com.