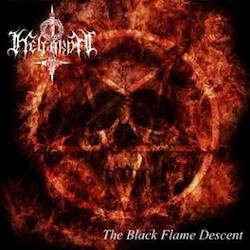 US black metal has always got a bad rap. I don't know if that's because they don't come from the frigid land of Norway, or if they're not "trve" or "kvlt' enough, or maybe some other reason entirely that some purest has to educate me on. However, over the past few years I have paid special attention to USBM and have found some really special albums. Nachtmystium's Black Meddle series, Krallice's self-titled debut and Social Disservices from Panopticon have found there way into my steady rotation. Let's not forget about Inquisition who have gained quite a following over the last several years. USBM is doing just fine and in fact is producing some of the more memorable bands of the genre lately.

This brings me to Helgardh. Hailing from the Appalachian Mountain town of Bluefield, West Virgina, comes another solid US black metal band. Their debut album The Black Flame Descent, although not groundbreaking, displays some well crafted, well produced black metal. This is not "post" or "gaze", but rather traditional black metal in the vein of modern Gorgoroth and At the Heart of Winter era Immortal. Plenty of tremolo picking, semi-melodic riffs, smooth double bass drums, and the gutteral, grim vocal stylings of frontman Famine make The Black Flame Descent listenable and quite enjoyable.

The sound here is the signature black metal sound. No gimmicks, no fluff and no need to add any other descriptions to describe the music. In a time where bands shy away from being just black metal, Helgardh wears the label with pride. They also wear corpse paint, leather and spikes and make no apologies for it. There really isn't much filler here and is pretty solid throughout it's ten tracks. "Blessings from the Funeral Pyre" begins with a riff that could have been leftover from Sons of Northern Darknes and moves into a Gorgoroth-esc melody. The vocals move from tradiotnal higher shrieks to lower growls. Famine delivers a near flawless vocal performance on the album. "Abomination" is another stand out track, beginning with a classic Mayhem vibe, then moving to blistering fast riff and culminating perfect mix of Immortal and Gorgoroth. "Etheral Dawn" is the albums best track. The references that I made above hold true. The classic black metal melodies and drums that you just can't help but bob your head to. The vocals here are very reminiscent of Gaahl's finer moments on Incipit Satan.

If you like traditional black metal, with great production than this album is for you. The production here is so thick and full. Every instrument is placed perfectly in the mix. The vocals are not buried so far beneath the music that you can barely hear them nor are they out in front that they bury the music. The drums pop and thump sounding absolutely amazing. The guitar tone is so rich and crisp. This great production helps to bring out the musical ability of the band. These guys can play and do it with heart. These mountain men create some cold and devastating black metal and put another notch on the belt of the current USBM scene.

To purchase: CD or Digital