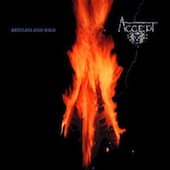 Germany's greatest and most influential heavy metal institution today has quite a tremendous backlog of albums (including their works released with both Udo Dirkschneider and his capable successor, Mark Tornillo, on vocals), and while Accept's records have noticeably varied in quality over the years, it generally always seems related to the songwriting rather than the style at hand. Decades of devotion to a flavor of traditional heavy metal that places over-the-top sensibilities into an accessible and approachable camp mean that Accept has proven to be a remarkably unpretentious band. The central aspect that really renders this band too mean to die is best described as veteran axeman Wolf Holfmann's courageous approach to writing punchy rhythms, in a manner that has consistently produced the most badass of metal anthems, something that took on its strongest form with 1982's Restless & Wild.

Unpretentious this fourth Accept album truly is, for while it has the same degree of attitude as the classic Balls to the Wall that would become its sequel the following year, it often comes off grimier and more unrestrained, striking a perfect balance between musical refinement and rawness. The latter appeal can mostly be accredited to the greater touches of early speed metal to be found across just under half of the tracks here, as well as the fact that Restless & Wild, as well as its predecessor Breaker, contain songwriting that serves as a necessary bridge from the less worked out material of their first two albums, to everything from Balls to the Wall onwards. As such, what we have here proves to be a positively essential chapter of a world class heavy metal band's development, as well as the entire genre's development on a larger scale.

Elaborating on Accept's importance to metal, I might as well go ahead and liken Hoffman's guitar work to that of Tony Iommi in its daringness, its willingness to "go for the throat" for its time (sans the doom and gloom is all), fleshing out both faster-paced and more melodic heavy metal characteristics to be immediately recognizable to this day, only a few years after Judas Priest had laid down the initial groundwork in the second half of the 1970's. An example of the forward thinking instrumentation, beyond the iconic opening charge of "Fast As a Shark" (its German nursery rhyme used as an intro literally chosen because Accept knew their sound was pushing the limits of heavy metal in the early 80's, in humorous contrast) include the banger of a title track that immediately follows, the opening riff of which astutely integrates some heaviness-maintaining power-chords into the rhythm base of palm-muted triplets, further defining a heavy metal guitar motif.

Speaking of defining metal-isms, many well-learned metalheads may know "Flash Rockin' Man" for containing the same hook that... every... trad heavy... band... ever... uses. However, this was before Saxon, Maiden, Dio, or Mercyful Fate did, thus further cementing the props Wolf Hoffman deserves - it is a damn good basis for a hook after all, another reason why choosing a core note to return to, for rhythm's sake, in between playing the melodic notes of the riff that actually vary, has proven so effective (as every good thrash metal bands knows). Beyond praises for the music from a compositional standpoint, however, the overall sound of Restless & Wild is so damn appealing and down to earth to begin with because most of its tunes are those you can CRANK for a sheer adrenaline rush; even the more paced ones like the closer "Princess of the Dawn" keep the listener on the edge of their seat with the right kind of musical buildups. Having an iconic frontman like Udo Dirkschneider in the fold, then, proves beyond doubt that this record will get your blood pumping arguably more than any traditional heavy metal release from the earlier 80's. "Neon Nights" is therefore a welcome inclusion as the one decidedly laid back song, although if it had the letter "K" in the title, it might be a driving enough metal song to send bloodied angels fast descending.

Accept's Restless & Wild is not a heavy metal record that leaves much to the imagination, but is a phenomenal experience especially for those who enjoy metal on a truly primal level. Nonetheless, it should be obvious that it never comes off as actually primitive or dumb at all with its visionary guitar work, ever-present rhythm base keeping the energy up, Dirk-schneider-ing vocals of insane wonderment, and all the like. Lastly, although comparing their music from this time period to some of my other most acclaimed heavy metal bands reveals less atmosphere or suspenseful gloom than Angel Witch or Mercyful Fate had, Accept do come across as a little more reliant on their core instrumentation in the best ways imaginable, validating the essential components of heavy metal music to be as indispensable as they are ferocious (unless you waste your time pulling revisionist opinions out of your ass that are nothing more than tepid, hollow, genuinely unconvincing fraud - just for the sake of it).