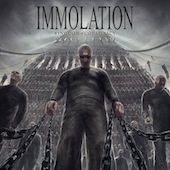 Immolation's Kingdom of Conspiracy, allows me, once again, to tap into my more sadistic and brutal side (as if I need an excuse). This band has never issued a clunker in more than 20-years going, and that sickening line continues here in just over 40-minutes of truly terrific death metal, New York style.

There's just a very strong 'typicality' to that New York death metal sound, and Immolation has it in every conceivable area, which is a thick, almost Swedish sound that differs mainly in the clean and crisp production the Americans so covet. With Kingdom of Conspiracy the band adds another winning notch to their already battered and hole-punched belt. That same thick sound is what keeps the fan base angrily pumping clenched fists and permanently affixing scowled faces all across the planet.

What sets Immolation apart from most other U.S. death metal bands is that underlying 'evil' tone to every album. Sure, there's a certain malevolence to every DM album and band; it's almost obligatory, really, but Immolation's tonal disease seems to be so natural and consuming that it just sets them apart from their contemporaries. This is very much your father's Immolation, with riffs so potent and tempestuous they could dent rusty steel girders. The opener “Kingdom of Conspiracy” peels skin from your forearms like random pieces of wax paper, slowing ever momentarily to shock the system and fool the minions of fringe design with solid, groovier guitar lines. It's the perfect start to a record, and as with every Immolation record the overall heaviness is second-to-none. I've always described the band's music as an avalanche of rocks just tumbling from a reef at breakneck speeds and decimating everything in sight. There is a certain pace to this record that seems a bit faster and riff-heavy, and that makes for a very happy audience because we've come to expect this sound from Immolation, and deviating from it would be catastrophic and out of line with the band's style. However, the 'slower' areas of the album are certainly welcome and expertly handled throughout, especially in “The Great Sleep”, which causes the head-bobbing to repeat for the entire five-minute-plus duration. Call it a nice break in the day, if you will.

The signature sound of total wanton ugliness emits from every track on this record. “Bound to Order” and “God Complex” find the famous formula and filter it through the amps with pinpoint expertise, defining just what makes sickening heavy metal music. I particularly like the time changes and smooth shifting in “God Complex”, which is one of the endearing traits of the band. Rather than simmering in some self-made rut of familiar chords, Robert Vigna and Bill Taylor take great pains to create some truly sadistic-sounding riffs for you and I to consume, and that's not an easy undertaking after all of these years where everything has been done to virtual death. When you're recovering from that little slab of scaled intensity, “Echoes of Despair” rummages around and bounces off the cranium walls with all of the trepidation of a stable of spooked wild horses. Never to be outdone, Ross Dolan growls and finger picks his way through one brutal track after another. Steve Shalaty still offers a drum-fueled eulogy fit for fight, and I especially favor “Indoctrinate” with its speedy and concise pattern that goes from 10 to 90 in mere milliseconds. We're fortunate to be able to claim these guys as our homegrown masters of the genre. Immolation provides, without fail, a sound so agonizingly volatile that only total and complete submission will suffice.

Without going on any additional long-winded, analogy-filled sentences, if you love Immolation, you most certainly will find the newest offering a maniacal piece of festering filth. This band is one of the last death metal legends that has yet to commit one single faux paus in its storied lineage, and for that I'm ecstatic and appreciative.

The band is currently on tour in the States; get out there and see them!