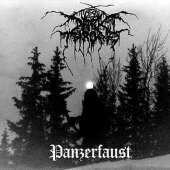 Today Fenriz is the darling of the German magazine Deaf Forever, but 25 years ago, Darkthrone was banished. In the eyes of the media, the band was the synonym for useless anti-music with fascistic tendencies. For an ordinary metalhead like me, they were never darlings or fascists. I just enjoyed their music. Well, Panzerfaust is not able to challenge Transylvanian Hunger, but it houses some decent compositions - and it reveals that Hellhammer / Celtic Frost were very influential for the Norwegians. The riff cascades of the mid-paced "Triumphant Gleam" takes the listener on a journey to the darkest niches of Switzerland and the droning guitars of the slow-moving "The Hordes of Nebulah" do the same. But the art of Tom Warrior and Martin Eric Ain (R.I.P.) did not totally dominate the record, even though "Beholding the Throne of Might" points in this direction, too. Darkthrone also were proud of their own roots. Therefore, the opener sounded like a second version of the title track of Transylvanian Hunger. The riffing, the pattern, the length, everything is a little bit similar to the prominent predecessor. Just a little bit, of course, only as if they were identical twins, not more.

This time the back cover proclaims that the album offers "True Norwegian Black Metal" and this description fits much better than the nonsense of "Norsk Arisk Whatever". The booklet explains that "Darkthrone is certainly not a Nazi-band" and I am happy that my political correctness remains unpolluted. However, I would like to add "and Darkthrone is certainly not a band that keeps a close eye on a clean production". Panzerfaust sounds less strange than the totally absurd Under a Funeral Moon, but the band still prefers a muddy and blurred mix. Nevertheless, it also possesses this misanthropic touch that suits the duo. Translate this sound into a picture and you get exactly the artwork of the album.

The most impressive track is "Quintessence". Co-written by Greifi Grishnakh, it reveals an enormous depth and an unholy suction effect. The nonsensical lyrics annoy only fools, but it cannot be said otherwise: they are nonsensical. "Five million women so alone in the night" and I would like to know who has counted them. The spiritual superego of Varg? The drunken alter ego of Fenriz? Or is this number just the result of a wet dream of Nocturno Culto? It doesn't matter. Everything is better than the "Six Fat Women" of Holy Moses. Either way, "Quintessence" leaves its long-lasting aroma due to its simple yet captivating riffing and the extremely charismatic vocals that express pain and pride, despair and battle-weariness. Too bad that a single killer does not make a great full-length. Panzerfaust suffers from the slightly boring tracks in the middle of the running order and, aggravating the situation, the closer has nothing in common with the usual tracks of the not-Nazi-band. An ambient piece with some spoken lines is not what I expect from a Darkthrone "song". Consequently, Panzerfaust confirms the proverb "where there is light, there is also shadow". Okay, Fenriz was probably of the opinion that too much light could damage his Nordic pallor, but I disagree, because the entire work stood and still stands in the shadow of its precursor.