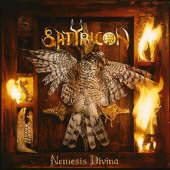 The peak of the Norwegian black movement is roughly 25 years ago. Today we have three types of black metal musicians from Norway. Some play in bands like Svarttjern that are doomed to stand eternally in the shadow of the national role models. A minority, - thank God a very small minority – falls drunken from stage and the last group has become its own parody. Satyricon have a tendency to the third category and so it is not easy to listen to their most impressive classic without a tear in the eye. Anyway, we are strong metal maniacs, right? Thus, we hold back the tears. So, let’s start with the obvious highlight: 'Mother North', maybe the most famous song of Satyricon ever. The obvious highlight? Frankly speaking, it does not justify its outstanding status from my point of view. It’s a good track, maybe even a great one due to its pretty surprising twists and turns, its effective tempo changes and pristine Scandinavian mood. Yet I must confess that I never got used to some of the vocal lines. Especially the background vocals sound pretty terrible, powerless and crooked. To avoid misunderstandings, this is just one detail of a complex and well-arranged piece. 'Mother North' scores with fantastic instrumental parts, an enormous depth, irresistibly fast sections and melodies that herald the triumph of a new force. In view of these advantages, it would be the best song on many albums, but it cannot compete with the real jewels of this high-quality output.

'Du Som Hater Gud' has this demonic, hateful and hyper-fast sequence that comes from the deepest pits of true black metal. The song is somersaulting during its most rapid sequences and the fact that a piano takes the lead at the end seems to be an ironic twist of fate. However, this mix of background harshness and unexpected piano power works excellently. And what about the opener, the aptly titled 'The Dawn of a New Age'? It comes in like thunder and lightning, a fiery weapon from the coldest regions of the North. This is really diabolical music, not the songs that were released under this name ten years later. The density and aggressiveness, both boosted by the professional, very intensive mix, make this song to a fanfare of the original Norwegian black metal explosion, regardless of its short soft break and the intermezzo with female vocals. The final line (“For the great day of wrath is coming and who shall be able to stand?”) summarizes the entire message of the song (and the album) perfectly.

What makes the ambitious, evil and majestic full-length a special one? Well, it is no unique selling point, but Nemesis Divina belongs to those outputs that combine a strong affinity for aggression, juvenile bravado and mature song-writing skills. Moreover, it marked the beginning of a new metal era, because works like this, “Enthrone Darkness Triumphant” or “In the Nightside Eclipse” opened many doors for the fresh sounds from the top of Europe. And just like early Dimmu Borgir or Emperor, Satyricon connected melodic elements with harsh recklessness elegantly. 'Forhekset' marks another prime example for this approach. Furthermore, its pagan melody at the end implies the many faces of the band. Satyr, the creative main man, shows the world his admirable potential (just to waste it afterwards). He produced the brilliantly sounding album and wrote all songs and (almost) all lyrics.

Okay, after having reached its zenith with 'Du Som Hater Gud', the following material is marginally weaker, if one might use the comparative of “weak” in a review of this milestone at all. But let me lose some more words about Satyr. His commanding vocals send shivers down the spine. He sounds like a war god that commands the legions to die. While expressing total control and pure diabolism, he does not vary his pitch very much. Nevertheless, the overall impression is everything but monotonous – and the same applies for the entire album with its homogeneous yet multi-layered and complex songs. Nemesis Divina made clear: it is one thing to hold “only” good music, it is something different to trigger an avalanche. Yes, it was not the only initial impulse for Norway’s metallic emancipation, but it constituted one of the indispensable building blocks. Even the partly ambient closer adds value to the work while symbolizing the calm after the great, god-like wrath. You do not know the album so far? Rest assured, the title Nemesis Divina does not promise too much.

This is was certainly one of the hardest hitting albums in the black metal world, and it’s also one of the hardest albums to learn to appreciate! It takes time to overcome Satyr’s dull and over-distorted studio production that makes the guitars seem like noise, and come to appreciate the advanced musicianship buried underneath. With every single listen this album surprisingly gets better and better, your ears will adjust, you’ll start picking up the good riffs and amazing arrangements, you’ll realize that no, your speakers aren’t getting to old, and you will embrace the true kings of Norway.

With "Nemesis Divina", in the true spirit of Norwegian black metal, Satyricon forge an album with a powerful brand of metal sound that simply blows away the competition. This is probably the perfect album to summarize all black metal, it’s nothing innovative, artsy, or avant-garde, just downright brutal and unbelievably fast.

Once 'Forhekset' kicks into gear, you’ll realize that you’re simply in headbanger’s heaven. One after another, the amazing riffs and transitions will keep you enthralled. The songs smoothly meld and fuse from melody to melody and eventually progress to a climax of a true epic. 'Mother North', the single, is a perfect example. Satyricon mix the accessibility and the progressive song-structure of black metal with the complexity of death metal, but unlike in death, the guitars are not tuned five steps down so the riffs actually sound like music.

But the problem of the fuzzy production does not completely disappear. Even with all the amazing music I am still often turned off by the general tedious and monotonous sound of the guitars. Maybe I haven’t listened to the album enough times, maybe Satyr likes his music to be a little inaccessible, I don’t know, but the production remains a bad aspect of the album. The greatest tracks, ones that I find myself skipping to when the sound gets unbearable are 'The Dawn of a New Age', 'Forhekset', 'Immortality Passion' and 'Nemesis Divina'.

Bottom Line: The most proper album to summarize all black metal.