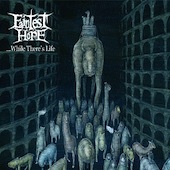 Type:
Release Date: 2013
Label: Self Released
Genre: Death, Melodic
1 Revolver
2 On My Deathbed
3 Rewind
4 In Our Blood
5 Away With War
6 Blind Faith
7 My Remaining Days
8 Your Day Breaks
9 Unwanted
10 A Bed Of Honour

Japan has been giving their version of heavy metal for years, coming out with everything from the amazing and brilliant (Loudness and Condemned) to the truly absurd (too many to list). The Japanese are a people always trying to innovate in all they do – and I like that. Faintest Hope is one such band.

Originally formed under the name Deathabalone (2007), they changed their name early in 2013, and kept their explosive melodic death metal style they had on one lowly EP they had. Comprising three guys and a small woman with a big voice, they seem to be in a league of their own as they show on their first full album. Powerful, uncompromising and impressively melodic – they show greatness in every note.

I am so impressed by the combination of melodic death metal that have very distinct additions of thrash/power riffs and time changes that elevates the band, showing that special something that most bands seem to have none of. Songs like the infectious "Rewind" to the punch in the face that is "Your Day Breaks" show a complexity that some DM seems to have lost.

Vocalist Miho Morisaki is so emotional in her delivery... hate mixed with a shadow of pain while wrapped in pure sorrow in spots – awesome. Arch Enemy’s Angela needs to watch her back, Miho kicks ass!!! Faintest Hope actually brings Japanese metal true hope – and more than just an actual chance of being a force all over the world. Truly this is one of the best albums coming out of the land of the rising sun.