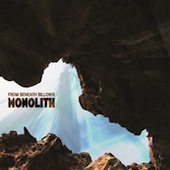 Type:
Release Date: 2013
Label: Self Released
Genre: Sludge
1 One Death And The Kings
2 Verity
3 Darkens The Will
4 Frontier
5 Enlivened And Sworn
6 Monolith

Sludge metal is a genre of metal I have a love/hate thing going on with it. Some of it I just love (Kylesa for one) while others are just not connecting with me (Greif). From Beneath Billows slides on to my desk and I am intrigued. Which side will this album land on for me? Will it be a like or not like?

Norway’s From Beneath Billows is one seriously eclectic band that is mixing some rather odd and unique parts of a darker form. Doom, sludge, industrial, some experimental and post metal collide into a slow moving storm of great power and constant slow motion- surging forth to tell its slowed tales.

Each song is eight minutes or longer, each building and growing in their own time… guiding us into a darker realm than our own. Minimalistic at points and heavy the next, the band seems to know when to do things or add or remove other things – and always doing it right. From Beneath Billows are one of those rare breed of bands that can incorporate these very scattered parts into something entertaining.

This was one album which has been a pleasurable one to review, one I will be playing long after it has been posted for the metal masses to read on-line. Monolith is now officially has a spot in the ‘love’ category, and won’t leave there for a while. Good music from a good band.