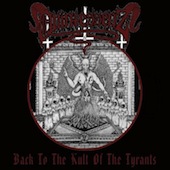 Do you like to know the greatest influence of the lone wolf Genözider, the only member of Quintessenz, as soon as possible? Then skip the first nine songs and start with the last one called 'Iron Hammer Sacrifice'. It begins more or less independently, before it transforms at 2:30 to the unofficial part two of Bathory's "Enter the Eternal Fire". A great second part, indeed, although Quorthon's classic tune remains unrivaled. But the riffs of 'Iron Hammer Sacrifice' are catchy, the composition is not too simple and the hoarsely echoing vocals create a gloomy atmosphere. To be honest, this is the last in a series of killer tracks, no matter how much Bathory is included.

But Quintessenz did not wait until the last song to pay tribute to Bathory. The prominent riff of 'Black Metal Holocaust' hits like a bombshell and it pleasantly reminds me of "Armageddon" of... oops... Bathory. So I am very glad to say that Genözider's and my favourite songs of Bathory seem to be the same. Nevertheless, from now on, I do not want to mention Bathory anymore but Quintessenz exclusively.

In general, the songs follow a similar pattern. They are based on strong riffs, powerful and mostly fast drumming while the voice sounds like a hunted animal. The songwriting is old-fashioned and fresh at the same time. In view of this fact, Quintessenz are able to maintain a high quality during throughout the album. Even the title track, in first place after the whispered intro, knows to fascinate. The harsh riff opens the door wide to a realm of sonic damnation - in its maximalist sense, of course. So you will be confronted with the memorable 'Ancient Rites' for instance. Equipped with minimalistic lyrics, it almost feels like a black metal mantra. Once you have internalised this track, you will not forget it too soon. This also applies to the grim 'Nekrowhore'. Thanks to its sharp riff, it will stick in your brain for a long time. Although I must say that formidable riffs and leads are omnipresent - listen to 'Wings of Blasphemy', it offers one of the best.

Even the slightly weaker tunes get to the point quickly and concisely. Thus, it is a great pleasure for me to recommend this full-length debut of Quintessenz to all fans who do not need technical tricks but 33 minutes of malevolent black thrash metal. The young Quorthon would have loved it, too.

Back in the day, old school black metal could thrash like hell. It was that melding of thrash and Satan that got the whole BM market going – look at Venom, they were a thrash, but more at a basic level. Another act has taken up the old school BM and brought it to the altar of Metaldom – Quintessenz.

One man German based act Quintessenz has summoned classic old black metal to rage for us all. Incorporating his love of such blasphemous pioneering acts as the mighty Venom, the unmatched Celtic Frost and even borrowing a bit of the power of the likes of Destruction. The one called Genözider brings his take on the thrash inspired BM and lets the unholy demons breathe life into its lifeless carcass.

Thirty three minutes of pure malevolence, powered by a dark scarred thrash, drags you screaming into the vortex of hades. Vile hymns like the hate soaked "Nekrowhore" and the equally blasphemous "Ancient Rites" slide you through the flames of Brimstone that lap at your soul with pain. For me, this is black metal: powerful, rich with pile driver riffs and subtle hellish hooks. Quintessenz has hit a home run with every sadistic note. I even love the album intro… classic darkened mood that leads you across the river Styx and into Satan’s home.

I love modern BM and its power but there is a certain unwholesome class the old school brings that the newer acts can’t bring. I loved every sadistic note and Black Mass induced riff on the album, and I know that most Metalheads will to. This is just old school BM updated, but kept its evil pure to its past – Ave Satanas.