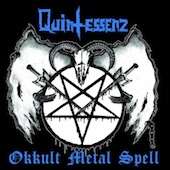 There are really greater intellectual challenges than to get access to this EP. The supplementary sheet tells us that GenozideRichard was responsible for "All okkult spells, remorseless deathstrikes and demonic chainsaw blasphemies" and in view of this description, it is obvious that this guy likes to create primitive songs. His program consists of filthy sounds at the interface between black and thrash metal. Bands like Blizzard, Bulldozing Bastard or Obsessör follow (or followed) a similar strategy. In view of this affinity for simplicity, the shabby and somewhat blurred sound is a matter of course. This kind of metal would not work with a high-tech production, because it needs a slightly dark atmosphere. In terms of the EP's aroma, a faithful cover version of Darkthrone's "Graveyard Slut" would have been a perfect match.

The above-mentioned German bands - Richard is also active in some of them - would play another style of metal without the primordial soup which was cooked by Venom and, to a lesser extent, Hellhammer. Therefore, please receive friendly each and every "Ugh" during the title track. And, as always, the spirit of the young Quorthon (R.I.P.) is on the loose. The rawness of the early days is an important motivation for Richard and his approach is authentic. Fortunately, crude black 'n roll elements are of subordinate importance with the effect that the 7" possesses the right amount of anger and currishness. "Fire, War, Hatred" and "Possessed (Heavy Metal Oath)" constitute the more aggressive half of the EP, but the oddly German/English titled "Über Metal" also picks up the pace after a casual mid-tempo part at the beginning. In accordance with the simple music, Richard's dark and boozy voice ignores any possibility to vary his pitch. Anything else would have been extremely surprising.

From my point of view, Okkult Metal Spell is an irritating name, because the songs embody a very secular approach. The 7" is light years away from the aura of truly occult music. For example, it has nothing in common with the early works of Mercyful Fate. Any kind of mysticism or spirituality does not show up. Indeed, the contrary is true. Due to the absence of technical tricks and surprising twists and turns, the output has the imperfect charm of a demo. Richard's intention was to reduce (underground) metal to its essentials and he was successful. In alignment with this way of thinking, the lyrics deliver nothing else than a seemingly endless row of buzzwords. With that said, it is time to sum up. This vinyl is (only) for those of you who appreciate some dirty fun every now and then. Metallic eggheads do not need to look out for this EP.