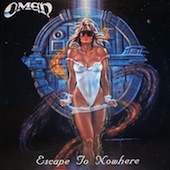 It sounds like a fairytale, but it is true. Believe me, my young friends: back in the eighties of the last century, it was possible to earn money with music. Incredible, isn't it? Even second tier power metal bands like Omen had the chance to get a piece of the cake. It was therefore only logical that some idiots crept put of their stinking holes and told the band members that they had to change their style. Three respectable albums and a pretty strong EP had been released so far. A lot of metal freaks thought that they had presented good music, but the idiots disagreed. "Did the band earn a lot of money with these vinyl’s? No? Then it can't be good music!" Irrefutable fact!

But I don't want to be too sarcastic, the eighties were a great decade. Without any kind of world wide web, the artworks had to indicate the style of an album - much more than today, they worked as an, well, omen for the content. And what do we see? Well, there is no need for a detailed description, just try to fall not in love with this beautiful woman who wants to get rid of her panties. And indeed, the music follows the cover without reservation.

Omen want to win new target groups with a polished work where theatrical, dramatic and emotional sections rule. Coburn Pharr, the new lead singer, expresses the whole range of feelings and I am happy that he does not start to cry. His performance is acceptable during relatively solid tracks like the stomping "Thorn in Your Flesh", but during the entire A side, he is at risk to get lost in his own cosmos of great and kitschy emotions. Omen have never been the most furious band, but they were authentic metalheads. Now they present so much schmaltz (once again: especially the overly solemn A side drives this album into the ground) that a pretty effervescent song like "Poisoned" is not enough to push the work on an acceptable level. The main problem is that everything seems to be calculated. There is this rather soft opener with its stereotyped design and the futile Golden Earring cover hails from the second position of the track list. Non-metallic music consumers, do you hear us? The level of vehemence is significantly lower than before and the production is not really bad, but without aggressive guitars, unorthodox screams or thundering drums.

It does not make sense to go deeply into the details, because Omen sold their soul for this album. The B side seeks solidarity with the old fans, and it reaches a decent level, although the closer presents a typical filler and Pharr's slightly egomaniacal performance is hard to endure. But Omen wanted to impress with the A side, where they bundled all elements of their new sound. Too bad, this idea came to nothing. Just like all the other bands with a comparable career, Flotsam, Lääz Rockit, Sacred Reich and some more, Omen's commercial success remained a chimera. Maybe the idiots had made some money before they crawled back into their still stinking holes. Hopefully not.