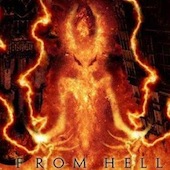 Type: Full-Length
Release Date: 2008
Label: Self Released
Genre: Death
1 From Hell
2 Where The Unbelievers Burn
3 Destined For Annihilation
4 Desolation Hymn
5 The Earth Belongs To Hell
6 In Agony Everafter
7 We Ascend

Beyond Mortal Dreams, an Australian band that's been around for a couple decades now, re-issued their first (and so far only) album From Hell, which is a great chance for fans to get acquainted with this superb release that seems to have been forgotten by time.

From Hell has only 7 tracks, with an overall runtime of almost 45 minutes, and no second is wasted at all on this record. From the atmospheric choir intro that precedes the storm of 'From Hell' to the last fading second of 'We Ascend', this album just ravages everything in its path. Inhuman vocals, malicious riffs and outstanding drumming are all around the place, with some impressive leads thrown around some tracks for added variety. The tracks all have a very wide gap of duration, with the longest one being near 12 minutes and the shortest under 3:30. Due to the whole album pretty much being a complete whole, this length gap may confuse listeners whether the next track actually started or if it's the same track. Despite this minor nitpick, let it not stop you from experiencing this album, as you will enjoy every second of this hidden gem.

Production-wise, it is fine for its time, with drums that really pack a punch while not devouring the entire band in the mix. Guitars are great as well, with every riff distinctive and every lead crystal-clear. Vocals are excellent for this style and year, with some very deep growls intertwined with high-pitch screams. Track 5 in particular has some small keyboard choir sections that mixes with the vocals, uplifting the atmosphere of the song for brief moments. Only minor detail is that I wish the guitars were a bit louder in the mix. Aside from that, the songs may feel a bit repetitive at moments, but nothing particularly terrible.

This is a beast of brutal death metal with some small tech elements and unrelenting pace, for fans of Morbid Angel and Vital Remains. Re-issue out on May 17th, so if you're a fan of the aforementioned bands, grab yourself a copy, you won't regret it.