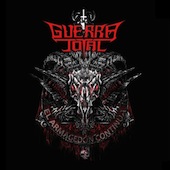 I have heard only a few bands from Colombia and have to say: not been impressed to any degree. They have fire but seem to be following rather than leading. Guerra Total (Spanish for Total War) are another hopeful from this historically rich area of the globe.

Hailing from Bogotá, Colombia, Guerra Total comes out of nowhere with some very interesting music to say the least. Speeding on like a killer car, Guerra Total combines speed metal with horror tinged black metal – the results are somewhat intriguing. Wild old school riffs, evil vocals and lo-fi recordings make Guerra Total’s album feel and sounds exactly like when the massive glut of speed metal flooded the marked in the mid 80’s.

Songs like 'Nuklear Zombie Division' and 'Black Speed Rock and Roll' are humorous, and yet never once comes through. Unoriginal and boring, the whole album seems to have been done many times before to the point that I had to stop the CD a few times to get through it. Bland, comic book like lyrics backed by flat sounding riffs that neither inspired nor moved clearly were then order of the day. Sounding like all of the one-album-then-disappear speed metal bands that had popped up through the 80’s before thrash took over, made this a forgettable experience.

If this band had even attempted to redefine their music a little, there would be something to hang on to. As it stands now, Guerra Total simply is not a band that has much to offer, and needs a total reworking just to get to average. I had hopes when reading the bios to start the review process, they were quickly burned and tossed away. Not a album to be bought.