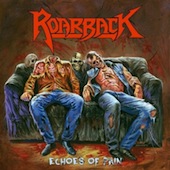 The Danish band Roarback has made a landing for me to review. Reading the bios and other things before listening, I was curious. Saying they take their cues from 80’ thrash and early 90’s death… I had to sit up and take note.

Combining early Slayer with early Sepultura, Roarback is old school thrash/death metal at its best, which comes across still sounding very fresh. Despite most of the band being only in their ridiculously early 20’s, Roarback pummels you with metallic riffs that are catchy and yet heavy enough to satisfy even the most jaded of metalhead.

The opener of the album, "Peoples Hate", has this almost punk sort of attitude set in a backdrop of straight ahead thrash metal. Slashing riffs and angry lyrics seem to meld into a weapon of mass moshing that is hard to ignore. Other tracks like nasty "Face The Sun" or the brutality laden "Warmachine" - are powerful as well, sending a bold statement that old school still possesses the power to kick our asses twenty times over.

With the twin attack of guitarists Andreas Rohde and Andreas Dixø, the spat venom of Dennis Ullehus with the Bass/drum battery of Mikkel Stender and Kåre Holm-Sørensen respectively, this band is one of the best at making Old School relevant again. It needs to be heard to be enjoyed, preferably with a cold beer.

Buy! Listen…! MOSH!!! Metal minions – you have your orders.