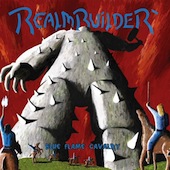 I love the term ‘different’. As a metalhead, to me it means talent mixed with creativity, a dose of pure I-don’t-give-a-fuck attitude and some aggressive power. Some newer metalheads think it is archaic that the sorcery and dragons still come from some bands. Ronnie James Dio (RIP), who was one of the best metal singers in the world, sang about all swords and dragons in far fetched worlds - and still kicked serious ass. A two man band seems to be trying to bring a world of their own and are all in their own way. The immortal Dio would smile, I think.

Realmbuilder is a two man band, whom has released two other LP's before this one was given to me. Described as epic doom metal with some traditional metal leanings and fantasy styled lyrics – intriguing is the word that describes my thoughts. Grand, slow and heavy with a sort of symphonic element to it, this twosome’s seem to know how to craft interesting yet thundering music that sends you to a different world and all through music that is sparse and yet majorly powerful.

I love the world created of war, giants, warriors and hate they made. The story sometimes comes across a little flat, like a child’s story at times, but as a whole it is very engaging. With four songs, all of which I enjoyed with the longest over 12 minutes – it is one of the better concept albums that have graced this old headbanger’s desk in a very long time.

Realmbuilder has brought back the idea of a story – and has made it accessible. I am going off now to look up more releases from this impressive duo, even as I continue to listen to this album over and over again. Pick up a copy for your collections and see what I am talkin’ about. I think you will not be disappointed. RJ would love this.