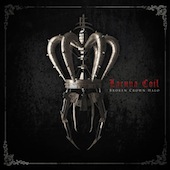 Type: Full-Length
Release Date: April 1st, 2014
Label: Century Media Records
Genre: Gothic
1 Nothing Stands In Our Way
2 Zombies
3 Hostage To The Light
4 Victims
5 Die & Rise
6 I Forgive (But I Won’t Forget Your Name)
7 Cybersleep
8 Infection
9 I Burn In You
10 In The End I Feel Alive
11 One Cold Day
MetalBite on YouTube
MetalBite on YouTube

My first introduction to the band was with this album. The first 3-4 listens to I thought was all right, then I put it back on the shelf thinking "I'm going to let this one sit for a while." Well, after about a month of it staying on the shelf not being listened to, I began to grow strikingly into it. I'll tell you why...it's not because it's anything too fancy, though as I grew more into the reasoning why they put words to the music, I was drawn into it wholeheartedly. It's an album and concept that just grew on me. This band has been around for quite a while and just getting into them well I'm in, big time. I don't care what the album is rated by others because I think they did metal justice with this album.

I would say alternative metal is correct with a slight groove to it. The fact that they make heavy and thick riffs are great as well as the male/female voices. When I'm not hearing it, I'm hearing it in my head. What they did here was put metal guitar with a good production sound and the vocals (both) seem to tell a story. I myself didn't read the lyrics, but you can understand a lot of them because Cristina sings clean vocals to this heavy music. They take every single word and make it fit to their music. The music itself sounds groove-laden and totally metal, though there are instances where there's clean guitar. The songs aren't very fast tempo-wise, but they're well thought out.

Upon revisiting their music with this text, they sound like no other really. This Italian made metal band has been given an injustice in the metal community because they put their hearts way into this which is bluntly to the soul of it. There really isn't anything needing change to it I would say everything fits all the little details about the guitars and voices are strictly in unison. This is an album that I never got sick of for a 2014 release. It has all this energy and feel to it that grasps the core of metal to it. They didn't compromise their music just to appease their fans, they really play and sing with heart and that's what's lacking in metal today. I don't think they overused technology in here either. A lot of bands do that.

This album can be found on YouTube, but really give the band some credit and buy the physical copy of it. All the tracks are my favorite tracks and Cristina's vocals are addictive. She really can hit those high notes and sing like a song-bird for this metal band. The music and production quality are superb. There isn't anything that needs changing with these guys, the songs are all arranged to fit every single note. It's such an awesome release, even if you don't really like the genre, just listen to a track. They're not a super-heavy band, but the music is just great, and I really liked the vocals both of them. Own it today!