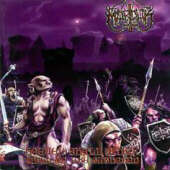 Marduk has released a lot of crushing albums. Some maniacs say that the merciless Panzer Division Marduk towers over their other artistic works. Some other freaks exactly despise this album because of its lack of variety while worshipping outputs like Those of the Unlight or Wormwood. However, the question about their best album is pointless and I am not of the opinion that Heaven Shall Burn... When We Are Gathered marks their outstanding release. But it seems to be at risk to fall into oblivion, not at least because of very strong later publications such as Serpent Sermon. It is therefore time to bring back to mind their effort from 1996.

To listen to this album gave me the feeling of being entrenched in the epicenter of a raging battle. While ducking my head in order to dodge the thousands of flying bullets, I was also fascinated by the overwhelming destructive force of the war scenario. Despite the fact that the full-length clocked in at less than 36 minutes, a song title like "Infernal Eternal" expressed the aura of Heaven Shall Burn... in a very appropriate manner. The track itself presented thrilling guitar lines and its small number of breaks was very well integrated. Furthermore, it was fired by unbelievably fast machine gun drums, but this did not come as a surprise. Almost every song rushed by like a black metal tornado. However, to maltreat the drums like a berserk who has taken too many drugs is one thing. To ennoble the mega-fast rhythms with the required melodies is something completely different. But this was no serious problem for Marduk. They had not started the battle in order to be the losers in the end. Their most lethal weapon was "Darkness it Shall Be", a constantly raging beast. In view of the mind-blasting velocity, the band was in danger to lose traction while lead vocalist Legion pressed roughly hundred words in every line. I do not know how this was possible, but it seemed as if he did not need to take a breath during the five minutes of the song. By the way, the lyrics matched perfectly with the composition. "I have dreamt a thousand dreams about crushing other's dreams" was one of the key messages and the song sounded as if all these thousand dreams came to life at the same time. It offered exactly the kind of relentless devastation that one expected when hearing the name Marduk.

Heaven Shall Burn... marked an authentic work. The band members were men of conviction and they could provide more highlights. One of them was the dynamic "The Black Tormentor of Satan". Although its name sounded like a parody, this tune also worked as a lethal injection of Swedish black metal. Its guitars were buzzing the ears of the listeners like a swarm of aggressive wasps. Of course, this song also was equipped with terrifically fast drums. In terms of velocity, only "Dracul va Domni Din Nou in Transilvania" set a counterpoint. It’s slow riffing gave Legion the possibility to shine with a more expressive style of singing. Apart from that, the song developed in a very positive way. It did not lack of tension and intensity so that it formed a welcome change.

However, the full-length was dominated by songs that were as fast as those of Immortal´s "Pure Holocaust" and the aura of the here described album was located in close proximity to that of the masterpiece of the Norwegians. Marduk's guitar sound was less icy, but it offered the same degree of mercilessness and decisiveness. More generally, the proper production was alright, and you won´t miss anything. Finally, I admit that I also liked the cover artwork and its coloring. The grim warriors embodied the musical approach in a fitting manner. Yet this was a minor issue. The crucial factor was that Marduk presented four killer tunes and three good songs. Only the brief intro did not add any value to the album.