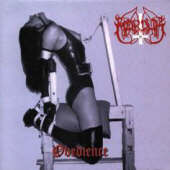 Marduk have released tons of outstanding songs like "Blooddawn", "The Hangman of Prague" or "Souls for Belial". The EP from 2000 does not hold such a killer and I am not quite sure whether or not it was necessary to publish these three songs as a separate product with an average, comparatively dull sound. Honestly speaking, I don't think so. Of course, quality beats quantity, but a little bit more quantity would have been fine. But regardless of the ridiculous playtime, I don't want to say that the material sucks. Only the cover version of Celtic Frost's "Into the Crypt of Rays" remains pretty unexplainable, because the Swedes do not give the song a Mardukian note. It therefore is just what it always has been, a good song from a legendary band, but - in my humble opinion - no essential classic.

The two exclusive tracks show different facets of the formation. The very aggressive, straight and predatory "Obedience" is based on the conservative verse-chorus-verse pattern and could have been the ninth number on Panzer Division Marduk, if we leave the lyrics out of consideration. No tanks are rolling - Legion sings about bondage in a very lame way. Okay, the text is in line with the artwork, but this alone is no crucial quality feature. Anyhow, "Obedience" constitutes another frontal assault and a good song from a legendary band, but - in my humble opinion - no essential classic.

Finally, "Funeral Bitch" presents slow-moving lines and a relatively catchy chorus, but its oppressive character does not fully come into its own. It delivers a contrast to the high-speed attacks of the previous album, but unfortunately, it is not on an equal footing with the songs of their record from 1999. However, I don't want to be too harsh and therefore I say that it is a good song from a legendary band, but - in my humble opinion - no essential classic. (I don't know why, but I have the feeling that I am a little bit repetitive today... however, I guess this must be a wrong perception.)

And, yes, that's all. Less than twelve minutes of decent black metal without any extraordinary characteristics. Take it or leave it, you cannot do much wrong. The real highlights of Marduk's catalogue are hidden somewhere else, just think of "Autumnal Reaper", "Of Hell's Fire", "Narva" and many, many more.