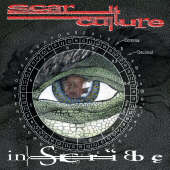 The grisly battering that is delivered by this group of carnivorous energizer bunnies will leave you choking and bruised. NYC’s very own Scar Culture have created a debut album that elbows its way right into your head and impedes any previously existing ability to form a complete thought.

The space between tracks is hardly enough to let you gasp for air before you are thrown right back into the tumult to undergo further thrashings of a rarely accomplished ferocity.

One of the greatest things about this ferocity is the dynamic shifting that it employs, keeping the speed freaks with attention deficit disorders well entertained. If Faith No More had turned strictly death-hardcore, the first rendition would have been Inscribe. Incidentally, soon after I made this assessment I found that the last track is a cover of FNM’s metal classic, Surprise, You’re Dead!

Despite the blitzkrieg of flesh-devouring vocals and riffing that is knocking on Pantera’s door, there is a little something that feels raw and maybe underdeveloped about the band. I could be a bat in Bo Peep’s panties, but I think it’s the drumming style. I don’t think that the drumming is bad by any means, but I think that somehow it doesn’t quite fit.

S.O.D. genius and Inscribe producer, Billy Milano, has picked a big candidate for rookie of the year. While Inscribe may gain cult status, with growth the following albums just might be blinding in the world of metal.

Scar Culture unleashes a full frontal assault with each and every song, laying utter waste to the listener. Picking a favorite is hard to do, Keep It To Yourself and Sever All Ties being some of my choice cuts, but these guys sure slapped a grin on my face with their bed-mint tribute to Ted Nugent.

Bottom Line: This is what American Metal is all about. The more I listen to it, the more I like it; the depth is not worn on the sleeve. Back up, you’re about to be brutalized.