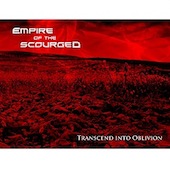 I have always enjoyed extreme music. I love when bands push the limits as far as they can. When something sounds incoherent upon first listen, but actually starts make more sense the more you listen, I get a warm feeling inside. In recent years I have enjoyed the works of Portal and Terra Tenebrosa for this reason. When I read the description of Empire of the Scourged I was intrigued. Avant-garde industrial death metal.

From the Netherlands, Empire of the Scourged have released their five song debut EP titled Transcend Into Oblivion. Combining extremely heavy guitar tones, deep guttural growls, a touch of black metal here and there, eerie keyboards and a generous amount of industrial style electronic beats. It's as if the noisiest, heaviest of death and black metal come together with Front Line Assembly. An even more extreme and eclectic version of Genghis Tron.

All five tracks on Transcend Into Oblivion are heavy as all hell and all five are memorable. However, there are two that stand out. The first of those being "Trapped in This Massive Process". It begins with a sci-fi type of sound effect, an eerie little keyboard passage, then the industrial drum machine. This all leads up to an ultra heavy death metal riff accompanied by deep death growls. The death riff trades off with a beat driven industrial passage. The big surprise comes at the three minute mark, when it transitions to doom metal. Slow single note guitar with a bell chiming. It then wraps up with a full on blackened death metal assault. The second of these would be "Foul Machinations of a Hollow Spirit". This song is the most industrial of the five tracks. In fact it is an industrial song. Erratic drum machine with lots of interesting sound effects produced by the keyboard. There is also female vocals and very few guitar riffs. This is the most interesting of the five tracks as well.

Empire of the Scourged succeed at creating something unique and interesting. The worst part of Transcend Into Oblivion is that it's too short. Clocking in at just above twenty-six minutes it leaves me wanting more. I can only hope there is as much energy and originality when they decide to record a full length.