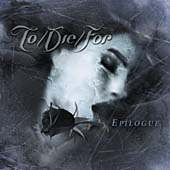 New Sentenced, HIM, Charon, Entwine...(feel free to add to this list) and To/Die/For represent the roster of bands that operate within gothic rock style, which seems to be a very popular trend in the new millenium. And why not? The women love it, it starts the alcohol pouring and the band becomes a primed and pumped sex machine... Wasn’t that supposed to be the main reason to start a rock band? Hell yes and I’m all for it. And since the above mentioned bands have more in common with rock than metal we should judge them as such.

Where should I start? Hey, it’s not easy, believe it or not, after a very successful debut “All Eternity”, To/Die/For returns with the greatly improved “Epilogue” on which all aspects of their music are turned up a notch. First off, singer Jape Perätalo, has progressed remarkably by adding more depth and feeling to his voice and whether it’s sorrow or joy his voice articulation outshines most of the time flat feeling on “All Eternity”.

Although the rest of the band moved into a more melodic and catchier direction they still were able to compromise their sound with one of the heaviest guitars and rhythm sections in this genre. From fast opener ‘Crimson Twins’ to my favorite track ‘Frail Without You’, which is a perfect example of the band’s strengths where melancholy meets heavy guitars backed up by a subtle touch of keyboards and simple but powerful drums, those guys can capture your mind and make you sing in the shower.

Bottom Line: Next time, when your new girlfriend (or boyfriend for that matter) comes over to your spider-ridden basement, turn off your beloved hate machines and play “Epilogue”. You’ll be surprised how fast your new victim’s resistance rubs off.