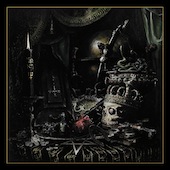 It is always a magnificent moment of grandeur when a promising and promoted band decides to write, record and publish its magnum opus. The meaningful spirit of "now or never" is in the air and everybody feels that the day of reckoning is coming nearer and nearer. My German fatherland had this situation two times during the last century - the result is well known. "Never" in both cases. But here we have Watain, a horde that has proved its ability to write fascinating music a couple of times. Stop breathing for a moment, they challenge fate... and the result is "never".

Watain meander through newly developed musical regions. That's no surprise, because you cannot produce something greater than before while still doing things in the same way. But it's always a risk. A good neurologist is a good doctor, but he is probably not a good surgeon, although both professions require successful medical studies. Crude analogy, I know, but a good black metal unit is not automatically a good dark metal band, although both kinds of metal require solid guitars. 'They Rode On', the most discussed piece of The Wild Hunt, shows impressively that Watain are not able to open the gates to new musical dimensions without copying the formulas of other formations. I listen to a typical ballad with a calm beginning, clear vocals, emotional guitars and a more or less catchy chorus. But cheap and predictable emotionalism does not lead to a profound song. Nine minutes of mediocrity in the middle of the album kill its flow in an annoying manner.

Speaking of predictability, the first number after 'They Rode On' emphasizes the harsh side of the Swedes. Everything else would have been a surprise, because Watain are interested in keeping their bad boy image. Therefore, they must destroy the impression that they want to earn money with their music instead of following strictly Satanic (or any other non-commercial) ideals. This is slightly stupid. Worse still, Watain confirm the old rule that a stylistic change does not only result in mediocre tracks that rely on the new formula. This dilemma mostly goes hand in hand with the fact that a band is also unable to write great tracks on the base of their previous approach. 'Sleepless Evil' lacks conviction, exciting ideas and depth. Fortunately, the band has not completely lost its power. 'Outlaw', for example, shows a passionate band that has created a furious and lethal piece with an intelligent design. The slightly ritualistic frame of the track, I refer to the "in ya a huu" choirs (is this correctly written? Don't think so), gives the song an eerie aura.

No, Watain have not forgotten how to pen mighty songs. 'Black Flames March' combines majestic elements with an unholy atmosphere while revealing a lot of compositional ideas and a more than solid substance. The relatively melodic 'The Child Must Die' cannot be blamed for being lukewarm or ill-defined as well. Nevertheless, the entire album holds too many theatrical elements. Its opulent configuration matches the media book packaging and the album boasts with melancholic, dramatic and wistful sections, but can anybody tell me when exactly does the wild hunt start? The title track begins in a strong manner and has its charm, but any form of wildness is conspicuous by its absence. Instead, it seems to be a number that Quorthon (R.I.P.) forgot to put on "Twilight of the Gods". Watain want to be the current kings of black metal, but they do not show alternatives how this genre takes the next step. One should learn from the past, but it makes no sense to reanimate old recipes.

No doubt, the production deserves the attribute "perfect", because it supports the ambition of the band: to be still (a little bit) black while being acceptable for a greater target group of music loving people. But even the best mix cannot hide the fact that the old dogma "less is more" is still valid. For example, 'Holocaust Dawn' or 'Ignem Veni Mittere' just prolong the album. And at the end of the day, things are pretty easy. Giving yourself an ambitious aim is one thing, but to reach it is something completely different. Watain fail. They left nothing undone, but they just forged another decent (and overlong) black metal album. This is not enough for self-declared kings. Never.