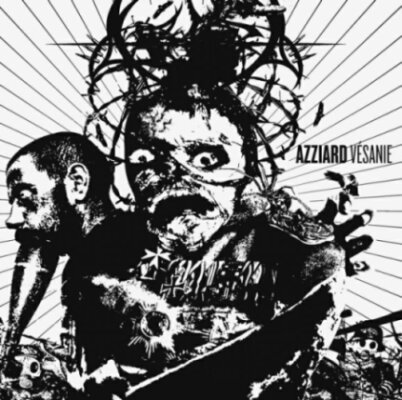 I went into listening to a band from France called Azziard with an open mind, hoping to find a metallic treasure to brighten up my day of listening to very average albums one after another. As the CD played…It was… interesting to stay the least.

Combining cruel Death Metal, murky Black Metal with lyrics about the horrors of war and worldly destruction… this act is not anything but simple one way thinking. Intense and brooding to go along with the insane heaviness, this collective five member band is not your metal come lately act, they are real as hell.

Sung in French mainly, Azziard’s explosive music dominates each and every second as they try to pound you senseless. It is a very good album, but sometimes tinny production along with very clearly repetitive guitar lines done between some songs which make it feel like the whole CD is sort of like an idea that is barely realized – that reality really holds back the music’s full ferocity from becoming explosive.

Despite everything that seems to support an album that is somewhat lost, this is a very good album. Without the passages between songs, this album is impressive but yet still does not reach the heights I think it could. A little more thought, practice and a better plan – Azziard just might be a band on the verge of something spectacular.