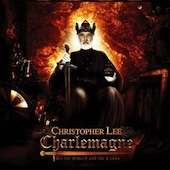 It is rare to go into a review without knowing what the general sentiment one wishes to convey actually is. Usually, after a number of listens, there's an underlying response to an album which keys the way you want to phrase each description, each word that you labor over. For instance, listening to Dimmu Borgir evokes a strong emotional response to punch myself in the face for ever choosing to engage in such a fruitless activity. Charlemagne: by the Sword and the Cross is one of those albums where the fair response seems to be ambivalence; allow me the luxury of trying to unpick this indecision to try and understand what this album represents.

Despite being promoted as some kind of metal symphony this album really lacks a substantial heavy metal presence and falls on the softer side of rock opera. Maybe this is a minor distinction but it is an important one that might quash the idea that this is a record laden with heavy guitar riffs; the compositions are closer to RPG soundtrack fare in nature with the guitars used to underscore moments rather than drive them (aside from the chorus of “The Bloody Verdict of Verden,” which is repeated on “Finale” and bonus track “Iberia”).

The narrated intros (that, luckily, are separated from the actual songs) are delivered in a less than ideal manner; the forced dramatics are cringe-worthy at times and make these tracks ideal skipping material when you just want to get to the music. The problems with vocals also extend into the singing; Mauro Conti provides a rather painful listening in “The Iron Crown of Lombardy”, though not helped by the clumsy wording of the lyrics, his execution falls into the hammy end of the spectrum and is accentuated in a most bizarre manner so as to make it hilarious.

Things get worse, however, with most heinous crime of the album: “Starlight.” Not only is the choir nauseating, but the duet between Lee and Lydia Salnikova is so mismatched as the former struggles to keep in tune with the latter. Oh wait... I'm forgetting that the whole song sounds like a neutered 80's power ballad.

So where does the cognitive dissonance come from? Well most of the actual music is, simply put, listenable. It may sound like I'm damning the album with faint praise, but it is such an easy album to engage with and as absurd as the lyrics and vocals often are, bits get embedded and suddenly the words and melodies are tumbling from your mouth in cod-operatic warbling succession. Like most albums that fall under the symphonic rock/opera banner there is something satisfying about the glorious cheesiness of the whole enterprise. There may be some level of guilty pleasure due to the music drowning in melodrama, but it's just so damn loony that it's enjoyable at the same time as being cringe-inducing.

So what conclusions can be drawn from this stream of consciousness writing? There are certainly better symphonic-infused metal/rock albums out there and there are also worse audio books out there that don't come with the dramatic music. On a purely superficial level this album is fun yet awkward and trying to determine if it can be recommended or not depends entirely on your tolerance for that special breed of music that so earnestly wallows in its own drama and bombast.