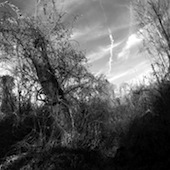 There is something to Harvey Milk's music that goes beyond explanation. On the surface of it this music just isn't right, the sludgy imperfection of the sound and Creston Spiers' hoarse hollering are ugly and awkward and can be very difficult to come to grips with. However there is something compelling about them that draws one back, and this album excels at sounding so unpolished and drawn out, yet is so bewitching at the same time.

It's a painfully slow piece, funereal in pace and strained in mood. The notes from the guitar and bass sustain for an eternity, not in an all encompassing drone style, but rather they hang in the air with an unsettling feeling. The sparse drumming sounds laboured with splashing cymbals right at the heart of everything, lazily stalking the lurching rhythm from one crash to the next. Then, of course, there are Creston's vocals. Reeking of desperation and mostly unintelligible, the odd line becomes clear which strangely sounds so mundane (“One more fish steak night. Yeah that's fuckin' funny.”), that it conveys the narrator's sense of helplessness and lack of control; a chain of events set in motion that he no longer has the energy or will to exert control over.

What is most engaging is that the music responds to this despair, sounding positively organic in how it mirrors the subdued crisis. “I am Sick of All This Too” seems about ready to jump-start proceedings with the opening flourish of a rock'n'roll riff, then it frustratingly stalls and hangs until it finds the energy to start again. Second go and it moves a bit further, and then the third time a bit further still... and finally finds itself back at the first hurdle, starting the process again. It's exhausting listening as each return to the beginning feels like another numbing failure.

The introduction of synthesisers through the album further taps into the unsettling atmosphere, “I Know This is All My Fault” opens with a sense of foreboding. As the song progresses and guitars take the fore, the synth becomes more accented and tense always buried in the background where it provides that nagging, wearisome presence. Eventually this all gives way to a broken-down piano section and Creston's soft, barely audible singing; so frail and beaten at this point from all the tension and resigned to the inevitable fate that awaits.

The closer, “I Did Not Call Out”, reaches that conclusion in dramatic style. It builds towards a subdued guitar solo and elegiac harmonies that seem graceful (to use the lyrical closure) in the face of the intense weight that produced them. Just as you begin to think this is the emotional release that the long burdened journey deserves, these very guitar motifs become subverted; a dreadful, drawn out weight piling on that leaves no doubt of the painful, despondent ending.

It's hard to say just how brilliant this album is without taking away from the fact that it is about as unremittingly bleak a piece as I've heard. A Small Turn of Human Kindness is such a tense and draining listen, so caught in a mood that is never to be dispelled. This may all have sounded hyperbolic, but the subtleties of each track and the greater piece as a whole really make this a special album, not just for its year, but any.