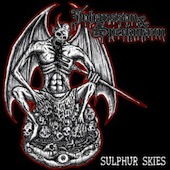 When you get two heavyweights such as Rogga Johansson and Paul Speckmann collaborating on a project, you hopefully feel a severe rush of excitement as I did. As long as I've been a fan of Paul Speckmann from his bands Master, Abomination, Funeral Bitch and other various bands and projects, I know him to be a man of quality with no shortcuts taken in his music. On the same token, Johansson himself possesses an impressive list of credits from Paganizer, Revolting and into Humanity Delete, not to mention everything in between. If you are an extreme metal fan and are not familiar with either of these men, eternal shame on you for existing at all.

Sulphur Skies is a death metal undertaking of vast importance and much-detailed scrutiny. When these men assign themselves to projects, it's usually microscopically evaluated by the elitist automatons in the movement, ready to strike down the effort with an uninformed keystroke or predetermined opinion. They seem to get scorn for not recreating the wheel with every release, but a simple standard of quality and dedication always trumps a staunch switch in style to assuage the easily lulled masses too scared to accurately define dedication. Once you are familiar with both of these guys' respective catalogs, you follow for life or your deviate for something easier to dissect. After going through the album once, now thrice for pleasure and measure, I can say that this collaboration is a winner all over.

What is offered here in Sulphur Skies is a generous amount of death metal speed, slow and crunching groove-inspired volatility, and well constructed vocal patterns. After being battered about with the opener, “Everyone Rots,” I'm not able to settle down for one single second. “Taste the Iron” is a slower entry into ugly brutality as Speckmann growls about suffering within an iron maiden device, a long-abolished and primitive form of amusing torture that still brings a smile to this old man's face. My personal mental illness aside, the next track in “Sulphur Skies” has some of the best riffing around; the true art in death metal guitar isn't vying for some tired technically-advanced foray into flailing pinch harmonics or lightning-fast scale humping, and I wish more musicians would realize this. These riffs and arrangements here are Death Metal 101.

Some of the really powerhouse tracks here are influenced by many years of tiling a soil long dried up by horrifyingly boring and trite bands attempting to lay new soil to an already rich field. Among those ancient influences, there is no larger champion that Paul Speckmann; his influence has been long felt and disgustingly under-appreciated for too many years. You can most certainly hear some of his moody Sabbath bass influences in the 'slower' tracks, but there's an unmistakable viciousness to the guitar work, especially in “Vile Stench and Decay”, which has some great tonal brashness. While I'm constantly reminded of Revolting and the recent Bone Gnawer EP ala Rogga's guitar work, this only adds to my personal enjoyment because as ugly as it can get, Johansson manages to disfigure it all so perfectly under the caustic shroud of bare-bones rudiment.

Going into this for the third time in one sitting, I grow more impressed with the level of intensity from this record. Johansson's guitar prowess is becoming something of an underground legend. Sure, some people seem to find his riffs overused and almost obligatory, but there an undeniable darkness that emits from nearly every riff the man produces that settles in your soul and grows like a festering tumor fit to burst. Moving past this euphemistic malignancy, simply put, Rogga himself is long associated with quality. One listen to “The Real Victims” and you might just understand the correlation between good death metal and plasticity feigned for the sake of posturing. There is no technical brilliance here, no over-saturation of production to kill the essence of the album, and no mix-matching of styles foreign to the intended mark. All instruments, while clear and mixed well, do not compete with one another for mock superiority, and that makes the album even more enjoyable.

For people who enjoy their death metal with a generous meshing of antiquity and modernization, you should really take in this pairing and enjoy the simplicity of one deadly and historical meeting of the minds, and how wonderfully sick they are!