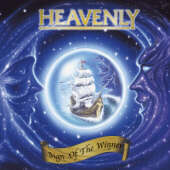 ::   ::
Type: Full-Length
Release Date: 2001
Label: Noise Records
Genre: Power
1 Break The Silence
2 Destiny
3 Sign Of The Winner
4 The World Will Be Better
5 Condemned To Die
6 The Angel
7 Still Believe
8 The Sandman
9 Words Of Change
10 Until The End

France and power metal? I though it wouldn’t mix, but it does and I must say, it does quite well. The follow up to “Coming From the Sky” is everything you would expect from a good power metal release but since we have hundreds of bands popping up like pimples on 14 yr old boy, it’s time to cut some of them from the food source and let them die... leaving Heavenly alone.

“Sign Of The Winner” starts with probably the best intro I’ve ever heard in power metal, ‘Break The Silence’ is not just a melodic piece of music it is a jaw-dropping experience of how the perfect atmosphere should be built before the ‘true’ song strikes. I won’t exaggerate if I say that I’ve already heard it at least 100 times... Actually I’m known for listening to this same track or album for hundreds of times, which some people see as a disturbing result of being dropped on my head too many times as a child... but let’s get back to the album, afterall this review is not about me or is it?

After going through the first minutes of ‘Destiny’, which is a logical continuation of ‘Break The Silence’, I thought this album would rock my world, which to some extent it did, but... why is there always a ‘but’? What I want to say here is that the rest of the album is more or less typical power metal that by no means is bad, everything is nice and perfect, compositions, musicianship, arrangements... the problem is I’ve heard all this before.

If with their next album they match the intensity, power and emotion of the first track and the beginning of the second one I’ll increase the scale to 11. So, please lock yourself in the studio, don’t go out, don’t listen to any power metal bands and deliver something that the whole metal world will be proud of. You have the potential to do so.

Bottom Line: Very impressive release from these young Frenchmen. “Sign Of The Winner” doesn’t disappoint it might even exceed some expectations, but (I love that word) I believe the best things are yet to come. No wonder Heavenly is called the future of French metal.