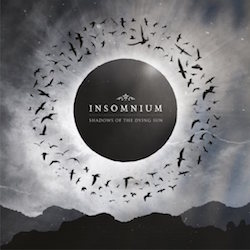 I fucking love Insomnium! I'm addicted to death metal like flies to shit, but after listening to the brutal side of this genre where tremolos, crazyass scales and progressive, even jazz-like compositions rule the day, it's nice to just kick back and enjoy music for what it is. Don't get me wrong, I'm hooked on both spectrums, but my point is that there must be time for both - otherwise I'd go insane trying to dissect every tact and digest fistful of razor-sharp riffs. And that's where Insomnium comes in, I can finally just hit the road, roll down the windows and let the notes flow without hurting myself.

So, for those new to melodic death metal world, Insomnium is an endless headbanging to a groovy and catchy wall of sound. No more, no less. And as expected, our Finns returned with sixth album that doesn't break any new grounds but at the same time takes their style to the new heights. Those guys are the kings of melody and I don't think there's anyone doing it better or is even near as far as melodic guitar leads go. What axe duo of Ville Friman and Markus Vanhala does is more than amazing, it's stupid amazing… and those brilliant solos! I'm not sure if anyone ever told them, but since metal bands' careers are not that lucrative to begin with, maybe they should start writing commercial jingles and live crazy-rich lives on the sunny beaches of tropical islands. I'm at a loss of words for the number of hooks that band produced over the last decade. On vocal side, Niilo's growls seem to be even deeper and cleaner, more natural compared to his previous ventures; and even though overall material seems to be more melancholic and laid-back, Markus Hirvonen's drumming feels tighter and expended with even more blast beats than ever before. On top of that, song progressions are simply incredible. Tracks are never boring, staying on same even level, but instead we are treated with constant change of emotions where melody either builds up to a monumental climax or tones down to a calm sea and never stays this same for longer periods of time. Did I mentions hunting classical guitars?

Contrary to the album's title, Shadows Of The Dying Sun shines with luminous and intoxicating aura of a sonic experience that has no equal in today's melodic death metal scene. And who the hell am I trying to convince? There's no one better at what they do, period.