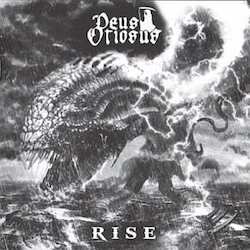 From the first time I heard these Danish monsters on Murderer back in '10, I had a hunch that there was going to be a long line of great albums that would emerge. Deus Otiosus dispels with the distorted production and over-the-top nuances that many death metal bands today try to infuse into the music to make it interesting. What you hear is what you get, and if you like your death metal raw and raucous with a good polish over it then you'll dig what you have here.

Rather than rely on speedy, tempestuous assaults throughout the music, Deus Otiosus cuts a very fine line between basic death metal and thrash on its newest effort, Rise. Make no mistake, however; this is about as deathly as the metal can get. From the first track, "Rising War" you hear the riffing that makes quality death metal so strong and encompassing. The familiar chugging that can literally shatter a door frame is what these Danes do best, and this effort only shows the band getting more interesting as it goes. There is a general air of heaviness and suffocation that hangs over the music that doesn't embellish the natural aura and doesn't make the album come off as sparse or dim. When you engage a band like this, the element of 'thickness' is almost expected in order for the band to successfully put across its message, and that isn't missing from this album.

The guitar work here touches all areas of death metal goodness and throws in the occasional 80's thrash riffing to satiate every taste and era. I really enjoyed "Vultures" with its slower, almost traditional metal sound that never fully crosses that line by keeping that crunchy feel in the tone that could never be accused of fully passing over to the 'other side.' When a band can neatly mix up its album with different styles and tones without losing the flow of the album, it's always a major coup for the naysayers who think death metal is one-dimensional and an otherwise stultified genre. All doubts are summarily removed when "Walk the Shadows" kicks in and the galloping returns with a vengeance. The mid-section has a very cool slow-down that, once again, relies heavily on the blurred lines of genre-jumping, and yet once again it fits perfectly without disrupting the flow.

If you aren't yet familiar with Deus Otiosus (for shame!) the vocals are your throaty death metal bellowing that are mixed clearly and don't get lost in a mire of guitars and drums. As for the rest of the band, picture if you will a tight formation of guys that have a fine knowledge of the genre and the others that surround it and you'll find yourself immersed in the fascinating chasm that is this band. When I say to you that everything is found in this album, make no mistake that I am being completely accurate in my humble assessment. You can hear some Swedish old school, some modern German touches, and a very brief hint or two of Norwegian blackness thrown in for measure. There are no weak moments here.

Rise manages to take everything that's ugly and brilliant about death metal music and mix it so perfectly with other a select couple of genres, creating a veritable hybrid of stylistic darkness not often found without compromise or repetitiveness. The band just keeps getting better, and I keep coming back for more.