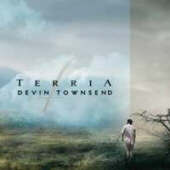 I’m not really sure what to make of “Terria”, Dev’s latest threshold in the metal niche. Obvious references to Strapping Young Lad, Infinity and Ocean Machine will no doubt flow thoroughly through most reviews of this emerald by Devin.

“Terria” is Mr. Townsend second album to make use of lyrical topics associated with the four elements of the world, ("Ocean Machine" obviously had the water references) and “Terria” is chock full of earth and naturalistic based eulogies.

While not being overtly familiar with Devin’s other work (barring Strapping Young Lad for which I am an avid fan of), what does come across as blatantly obvious is that the majority of Devin’s work for a CD goes into the lyrical content, whether its serious or of a comic nature, these are highly thought out contemplative lyrical themes. That, or Devin has got the quill based intelligence, which is on the same page as Mr. Shakespeare.

Emotion. No wonder Mr. Townsend gets so mentally drained from the conception of each of his recordings, there is so much pent-up anger, broodings and general infuriatedness in “Terria”.

I’m not sure if I really agree with a lot of what Mr. Townsend says on “Terria” (though music isn’t meant to invoke international debate), parts of what he says comes as contrived, environmental activism on behalf of Devin (that is not to fault the songwriting which is exceptional). The reason I say that is because there are a few parts on a few of the longer tracks that are a bit false and make me squeamish, an example being the dolphin crying on ‘Deep Peace’.

The only other criticism I have with “Terria” is the lengthy proportions of many of the tracks; a fair chunk of the lengthier songs could have had a quarter sliced off them and no-one would be none the wise. An example being ‘Mountain’.

Those minor quibbles; and they are minor, “Terria” is a fantastic journey into the realm of the environmentally friendly, pollution free world with the hollering of dolphins and where man and tree can live together hand in hand with each other forever.

My favourite tracks are ‘Fluke’, which also happens to my favourite track this year. ‘Fluke’ whilst not being overly complicated musically contains so much untamed emotion that it makes you want to stand up and scream “Yeah Devin, sing that fucking shit, fuck yeah mate, you fucking shred!!!!!” or something of that nature.

Bottom Line: Man this album just reeks of ‘save the environment philosophies’, and the album art is no exception, however, regardless of lyrical content and depictions displayed through the album, “Terria” is quite gnarly. “Terria” is a trip to the earth’s heart and why she cries out in pain. With choice cuts like ‘Canada’ and ‘Fluke’ you can do a helluva lot worse than pick up this emotion driven baby.