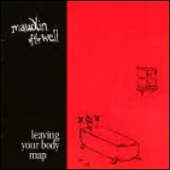 I guess writing unique music wasn’t enough for Maudlin Of The Well so they decided to give us a double CD, which is, released separately as “Bath” and “Leaving Your Body Map”. I’m not sure what the idea behind it is, but by judging their moves based on their music I don’t expect anything unexpected anymore.

If you’ve never heard them before, prepare yourself for a ride of a lifetime. For all you freaks looking for experimental music, I have great news, your journey has ended. Maudlin Of The Well delivers more than you can bear; “Bath” and “Leaving Your Body Map” represents over 120 minutes of unique musical adventures unparalleled to anything you’ve laid your ears upon. Although, I warn you this is not an easy listening, in fact my first session ended after about 30 min. of “Bath”, I simply wasn’t expecting anything like it.

Imagine yourself being in one moment in the symphonic concert, jazz club, poetry hall, rock festival, death metal pit, even church... and I don’t think I’ve even exposed all the angles the band covers with their music. In one moment you catch yourself with closed eyes hovering away listening to the beautiful classical guitars, trumpets, violins, clarinets and what have you and in a second be woken up by heavy riffs and blast beats. You think it’s nuts? The next track starts with church-like organs followed by jazz like harmonies and then we go heavy again.

I guess it wouldn’t surprise you if I say that the vocals range from male and female clean voices, deep growls, screams and disharmonic passages to just playful singing? How about the background on ‘Interlude 2’ played by clapping the surface of the water... But what amazes me the most is the fact that those songs are actually songs and not just pieces of unrelated music genres. One thing is certain; Maudlin Of The Well consists of one of the most talented groups of people I’ve heard in a long time if ever.

Whatever I wrote about these albums would never describe the complexity and emotions captured on those CDs and I’m not even going to classify the music cause it’s simply impossible. If you’re open-minded and have enough time and will to dive into their world the final satisfaction over exceeds the initial expenses.

Bottom Line: I don’t know what drugs are they using but it must be the best stuff on earth.