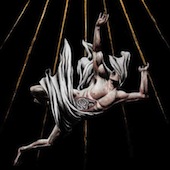 It's just not enough to say that Deathspell Omega's fourth commercially released full-length is great, nor is it enough to say it's a masterpiece of black metal. To borrow from the band themselves a song off of their Drought EP, this album is an abrasive swirling musk of unsettling corporeal madness. It's unapproachable. It's complex beyond any measure of complexity. It's impossibly fast. It's philosophical. It's boundary testing, patience testing, sanity testing, sense testing - it's unwelcoming and unpleasant.

And I love every second of it.

Going into this record directly after the fantastic, but flawed Si Monvmentvm Reqvires, Circvmspice, I didn't know what to expect other than a continued pummeling of my very lofty expectations upon closing out the first part of what I called "The Unholy Trilogy." While Si Monvmentvm... had fantastically gratuitous moments in overwhelming abundance ('Sola Fide I' and 'Carnal Malefactor', anyone?), it did have its fair share of filler tracks that could be skipped or removed altogether. But at the same time, I believed that omitting any of the songs would've thrown a wrench in the gears of the message DsO was pushing, which was clothed in dark Theistic Satanist robes. An omission would serve as a compromise to Deathspell's philosophy, so they had to keep every song they had written and composed, even at the risk of having an overly long and bloated album. So in the end, I'm just being kinda selfish.

2007 is when Deathspell Omega hit their creative zenith with this album. According to the band, this marks the second part of their Unholy Trilogy, which, when all three albums were put together, would serve to be a "theological dispute on the divine essence of the Devil, the roles and virtues of faith and the place of man therein."

What this album does is answer the question if there could ever exist a near perfect record. It's not often I find an album that meets that criteria, but here comes Deathspell Omega to prove me very, very wrong. A frightening sense of isolation exists throughout this album from the spacious ambiance of the both 'Obombration' songs, to the uneasy churning muck of the 11-minute monster 'The Repellent Scars Of Abandon & Election', to the petrifying silence that starts halfway through 'The Shrine Of Mad Laughter', each song is a part of a larger journey this album takes you on, particularly to underscore the unabashed horror of the Christian religion and its hypocrisy so bare and naked. All the while, the slower parts are adequately complemented by the performances of the band members. Those moments of calm, though they give a brief moment of solace, promulgate the utter destruction of whatever faith the poor souls who listened to this had, now being sucked away into a black void of nothingness.

If this album or any of the albums with Mikko Aspa are any indication (with maybe the exception of Si Monvmentvm...), I can see why Deathspell Omega refuses to play live. This is some unbelievably complex shit for black metal. It's not technical black metal, but I could see people making a good argument for whoever drums on this is one of the best drummers in black metal. Listening to him keep up with these insane, incomprehensible time and tempo changes is more than commendable. It's honorable and humbling. Going from calm progressive drumming to impossible kit destruction in less than a fraction of a second is one hell of a feat. Coming in right behind him is guitarist Hasjarl, who's guitar lines are disgustingly fast and dissonant to the point where there's almost no melody, yet still coming across as being so memorable. So many chords and riffs are just instantly stuck in your head the instant you hear them, like the riff that opens 'Bread Of Bitterness' or partway through 'The Repellent Scars Of Abandon & Election'. My favorite moment is near the end of 'A Chore For The Lost' when he delivers these series of melodic riffs that couldn't make the song any more amazing than the rest of the songs here. Like how the hell does Hasjarl conjure up these infernal riffs? I can imagine from a cosmic black hole of from the deepest, most bottomless pit ever made. Khaos' bass lines are surprisingly clear when taking into consideration how this album is mixed and how everything seemingly mushes together in a blurring wall of noise. They shine through in the chaos, can be heard just fine, and are just as memorable as the guitar riffs.

The album ends with the second 'Obombration', which I learned after looking it up was taken from the Latin word, "obumbrare," which translates to mean "shadow," or obumbrationem, which means "overshadowing," which is perfect as both open and bookend the album. The albums philosophical undertones come to a head with this closer. After everything you've heard, after all the chaos, the insanity, the unmitigated, unbridled syncope this album caused, you'd expect the closer would give you ample time to catch your breath and regain your discombobulated mental state. If you were naive enough to think such a thing, then Deathspell Omega are far smarter than you. What would you expect other than a dissonant piano playing softly in the background while horns play, slowly growing louder and louder as the paranoid claustrophobia sets in? The ending forces you to confront your deepest chasm of fears, to see with your own eyes the unearthly beasts of formless darkness, and leaves you unfathomably broken to the core of the threshold of your soul. And as you pick the pieces of yourself up to put back together again, you sit there wondering to yourself, "What?"

This album will take you on an experience you've never been on before. Musically, it's probably the most unpredictable thing I've ever listened to in my life. Forty-six minutes of pure terror, consternation, dread, anxiety, and horror. The realities of some of the darkest corners of our world can only be as shaking as this album. Every song is a testament to the evil of man, the futility of theocracy and religion, the intelligence of thinking for oneself, and the reverential devotion of the horned lord of Hell.

Every genre of metal has its perfect album or its near-perfect albums. "Peace Sells...But Who's Buying"?; "Biomech"; "Left Hand Path"; "Nespithe"; "Nightfall"; "Dead As Dreams"; "In The Nightside Eclipse". Black metal has Fas - Ite, Maledicti, In Agnem Aeternum, and it's perfect. I'll go so far to add it's not only one of the best black metal albums ever made, it's one of the best albums ever made.

I'll try my best to summarize the impossible, ravaging chaos that this album as a whole is.

So, after years of listening to death metal, I decided to search for something new, something that actually caught my attention and never let go of me. Something unpredictable, that sounded impossible. And then I was blessed with the discovery of Gorguts' third album "Obscura". Since then, a whole new world has been shown to me, the world of chaotic, dissonant, yet meticulous guitarwork.

But not even that would prepare me for the beast that this album is.

I remember finding Deathspell Omega years ago on this same website. And after the aforementioned discovery, I remembered this band and realized that, much like Gorguts (and coincidentally, in the third album as well), they had changed their style to "Avant-garde black metal". My curiosity led me to listen to the first work in their metaphysical trilogy Si Monvmentvm Reqvires, Circvmspice. I have to admit that, while the album is a significant improvement, in both guitarwork and sound, it still felt like they could go even beyond that.

So then I decided to listen to this album, which for many fans of this band represents the greatest achievement in both the band's career and in black metal in general.

Beginning (and ending) with the track 'Obombration' (which, as another reviewer cited, is an invented word derived from the term "Obumbrare", which means "to overshadow"), this album will be the most jarring, hellish, chaotic and apocalyptic 46 minutes of your life. 'Obombration', with its doomy, sinister riff that repeats to the very end it’s just a preparation to a hurricane of madness.

And then, the following track comes, and from there on, you cannot turn back.

Fas - Ite, Maledicti, In Ignem Aeternum is the most terrifying, abrasive album I have heard in my life. The maniacal speed, the impossible riffs, the first line delivered by vocalist Mikko Aspa in 'The Shrine Of Mad Laughter' is enough to describe this album. You'll have no breathing room, no moment to relax, no time to try and discern what the fuck are they playing. Just pure, unfathomable chaos.

This rollercoaster of insanity will continue with barely any rest for your ears. Every track, despite being mostly ravaging dissonance at work, has its own identity. Some starting slower only to go maniacal in mere moments, others starting with a jazzy-like clean guitar and others featuring different vocal harmonies amidst the chaos. Curiously, some tracks feature weird guitar solos, buried under the crushing wall of noise of their respective tracks. And then, as the album reaches its end, a dreadful piano plays, while some kind of orchestral sound accompanies Aspa's final lines, only to all of them to go in complete silence.

And so it ends, and you can finally catch your breath, relax, and think about what you just heard.

The pit from where Hasjarl summons his riffs is bottomless, if what he plays can even be considered to be "riffs". The bass, while having some shining moments, is mostly buried under this crushing wall of sound. Mikko Aspa, the vocalist and the only band member whose identity is known, delivers a mostly growled vocal style throughout the album than the high-pitched vocals commonly known in black metal (if this can be called black metal) & the drummer, whoever it is, is downright inhuman in its execution, keeping up blast-beats for what seems like an eternity while delivering fills every time possible.

If there a reason why I say that the first line said by Mikko Aspa in 'Shrine...' describes this album it’s because this album is terrifying, from start to finish. There shall be no rest for you as long as you listen to this in its entirety. It requires plenty of listens to understand most of the action taking place, but the feeling of dread, hopelessness and despair remain as intact as the first time you listened to it.

And aside from describing the album perfectly, it can very well summarize how insignificant most black metal bands feel when compared to Deathspell Omega.

God of Terror
Very low dost Thou bring us
Very low hast Thou brought us.