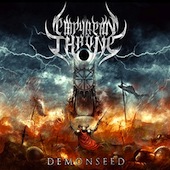 The words "Blackened Death Metal" evoke a Pavlovian response in your humble author; two genres that should combine to ferocious and brutal effect but usually end up a laboured and non-committal broth. The conditioned reaction? Intense yawning. Step forward Empyrean Throne...

Offering up this debut EP, the Californian six-piece take cues from the death metal spectrum for the majority of their palette whilst the blackened element comes in more subtle hues applied around the edges; thus making "Blackened Death" an appropriate stylistic tag. There are hints at the thrashier end of melodic death, with some rhythmic synchronicity perhaps indebted to modern deathcore. The finished work is remarkably refreshing to take in, there’s something vibrant and energetic about the meshing of styles and the execution is convincing and relentless.

Witness the opener Death March; its tightly regimented drumming and guitar work snapping away, with a haunting cello dirge providing a lament over the focused assault. There is something vaguely Kataklysmic about the style of the music; it’s tightly delivered with an emphasis on the snap of the snare, there’s a technicality that is kept firmly reined to the purpose of aggression, and there are fine grooves in amongst feral blasting. Not a reference for the purists perhaps, but there are also slight echoes of Cradle of Filth tonally, especially in the closer Follow The Plaguelord which carries the blackest feel of the EP, with a gothic piano backing that wouldn’t sound out of place on Dusk and Her Embrace; even vocally the track bears some resemblance to England’s out of favour sons. Speaking of vocals, the varied approach tops things off nicely; whilst not earth shatteringly original it adds that little dynamic emphasis which adds to the finer detail of the completed work, even if the raspy "You are nothing but vermin!" ("Nothing but Vermin") is liable to ruin the listener’s self-esteem after repeated listens.

With each listen the word "refreshing" springs to mind; it is thoroughly enjoyable to hear something from a band that manages to shape its origins into a form that is both energising and maximises punch. Perhaps the brevity of the release aids in that concentrated feel of the attack, but nevertheless this is an enjoyable first strike.