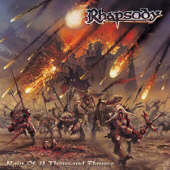 Above all else, Rhapsody’s latest; “Rain of a Thousand Flames” is an experience in jollity. Rhapsody’s overblown compositions should tell us Rhapsody are having as much fun making this record as what I am listening to it. Meant to be a little teaser to their full-length album coming in February 2002 on Limb Music Products and is specially priced due to it being only 42 minutes in length. But this is the sort of album I would definitely pay full price for.

‘Symphonic Epic Hollywood Metal’, dubbed by Limb Music Productions; that should tell half of what “Rain of a Thousand Flames” is all about. It is clear that Hollywood often does not take itself seriously, and Rhapsody follow whole-heartedly in their footsteps. If you thought some of Children of Bodom’s keyboard integration on their last two albums were mad, you have seen nothing yet. The difference is that while Children of Bodom’s seemed forced and slightly out of place for more serious tunes, Rhapsody’s are more enjoyable and fit better with the melodramatic stylings of the “Rain of a Thousand Flames”.

What is interesting and unique about “Rain of a Thousand Flames” is that there is an enormous lack of single man normal vocals. There is lot of speaking and telling of fantastical deeds and stories, but there is very little singing in the normal power metal sense of the word. This is a good thing, and adds to the mystery of the album and the world Rhapsody thrusts you into. Epic choirs and spoken passages are more the norm than the standard power vocals. Vocalist Fabio Lione does an excellent job of not taking a front seat like many power bands do. Balance is one of the strongest features of “Rain of a Thousand Flames”.

“Rain of a Thousand Flames” is split into two sections. The first three tracks give an introduction for the onslaught which will follow next; the next four tracks fall under the name of ‘Rhymes of a Tragic Poem: The Gothic Saga’ and incorporate their songs together something like Iced Earth’s “Something Wicked This Way Comes” and the ‘Something Wicked Trilogy’, but being slightly more dynamic in proportions.

This is one of my favourite power albums of the year and should propel Rhapsody further away from the other power metal bands in the race. My only gripe with “Rain of a Thousand Flames” is while being overblown and enjoyable, it can sometimes be too pompous and silly the beginning to ‘Queen of the Dark Horizons’ comes to mind. That small smear on Rhapsody’s latest aside, this is a fully fun and exciting release.