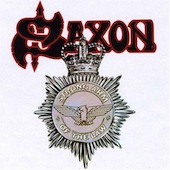 This year we celebrate the goddamned 40th anniversary of Saxon’s second and third album. Here I want to speak about Strong Arm of the Law. If this is no cool name for a metal album, then I doubt that there exist cool titles for metal outputs at all. Moreover, a look at the track list proves evidence that Saxon delivered their part in terms of identity-creating buzzwords. “Heavy Metal Thunder” or “To Hell and Back Again” shaped the outlaw image of an entire music genre. This was generic and greenhorns might be of the opinion that it sounds primitive, but dudes, we are speaking of 1980 and at that time, songs like “Heavy Metal Thunder” were exactly the stuff the growing scene needed – in terms of the music and of the lyrics.

The opener is a pretty aggressive statement with concise riffing and “To Hell and Back Again” is almost a harbinger of the speed metal revolution. Not as “fast as a shark”, but still an up-tempo rocker with swift guitars. The same goes for “20,000 Feet”, another nice up-tempo headbanger of the first generation. Of course, Saxon mainly delivered traditional stuff (naturally without knowing that we would call it traditional 40 years later). The title track, for example, mirrors the 1980’s status of the heavy metal development pretty well. The basic riff could originate from the Young-factory as well, the melodic elements do not come off badly and the chorus builds the central part of the conventionally structured track. Finally, Biff’s vocals tower above the music. His voice was never the most voluminous one, but he is able to convey the lyrical content authentically. Thus, he gives comparatively simple rockers like “Hungry Years” something special. Nevertheless, it would be an exaggeration to say that all pieces are real jewels. “Sixth Form Girls” nearly marks a real flop. On the other hand, the album followed hot on the heels of Wheels of Steel. So, when taking in consideration that only four months lie between these two full lengths, nobody can blame early Saxon for creative under capacity.

Listening to these tracks in 2020 leads to the surprising conclusion that they still sound fresh and nearly timeless. Maybe the almost eroticizing fact is important that one is confronted with one of the first steps of metal and I cannot exclude that the originality of this classic compositions is influencing (or even manipulating) my perception. Anyway, the album does definitely not suffer from an ill-defined production. The intention to create a really heavy album is still tangible.

Finally, the album dealt with one of the most discussed crimes of human history. ”Dallas 1 PM” did not only glitter with its stoic yet somehow threatening guitars. Its lyrics about the murder of JFK made clear that heavy metal does not shy away from topics which have been (and still are) rather unpopular in radio-friendly music. And even more than 56 years after the shots from Dallas, it is still an open question who killed the President. Just one thing seems to be sure, it was not Lee Harvey Oswald. Why should he have wait until the limousine had passed the building where they found “his” ridiculous shotgun? He just paid the price for somebody else. But I digress – and I admit that I cannot maintain that Strong Arm of the Law has been discussed as often as the death of Kennedy during the last four decades. But it has stood the test of time in its own way and I am sure a lot of Americans would have been happy if a strong arm of the law would have protected the President on Elm Street. Maybe we know more about this crime when it comes to the 50th anniversary of Saxon's third work, but I don't think so.