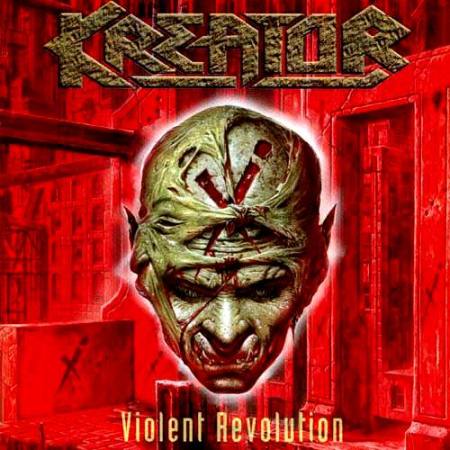 20 years ago, Kreator welcomed the new millennium with Violent Revolution. The album marked a turning point in the history of the once furious pioneers of German thrash. In 2001, the more or less experimental period that had begun with Renewal was a thing of the past. Mille and his business partners swung the thrash axes again. Unfortunately, Ventor did not reappear as lead vocalist, but we can’t have it all. Naturally one can discuss whether this was a credible return to the old style. Either way, whenever I was confronted with the crude Renewal or the velvet Endorama, I wished I could listen to a real thrash album – even if it lacks authenticity to a certain extent.

I know it’s not a new finding, but thrash lives from its energy, its velocity and its razor-sharp riffs. On the other hand, maturity is no essential ingredient. However, we cannot blame the band for having been active for nearly 20 years in 2001. What I want to say is that Violent Revolution sounds good, but the routine of the quartet shines through every riff, verse, chorus and solo. This does not mean that the songs are as lame as the predictable artwork. They are competently designed, the riffing conveys a very solid degree of heaviness and some well-placed tempo shifts lend the material a pretty dynamic appearance. What I miss is a higher level of spontaneity (underdeveloped), impulsiveness (almost absent) and ferocity (non-existent). To my surprise, the production shows the same deficits. It’s a good, pretty clear mix with a cool guitar sound, but somehow it has an inoffensive character. I cannot say that this kind of technical implementation catches the unbridled spirit of thrash, even though it can be considered as good in objective terms.

Anyway, the programmatically titled opener 'Reconquering the Throne' shows the band in good form. The song does not lack a basic aggression and Ventor pushes the pace while using his double bass accurately. The title track scores, among other things, with its catchy yet heavy chorus. The mainly swift 'All of the Same Blood' is Mille’s peace, love and understanding song. It does not fall victim to a soft musical approach, but its lyrical message is amazing for a band that once felt the pleasure to kill. But of course, the guys do not use words like peace or love, they prefer to transport their statement while singing about “armies of totalitarian psychopaths”. Be that as it may, the first half of the album holds almost only good tracks (and ends with another programmatic statement, the pretty rapid 'Second Awakening'). Especially 'Servant in Heaven – King in Hell' has a lot of thrashing charm, although its mid-paced approach does not make the pulse run faster. But its rasping guitars of the verses and the effective melody of the memorable chorus form a strong piece that does not need high velocity to leave a good impression.

Every single musician performs well here. Mille makes a good, pretty charismatic vocal delivery, the solos work and Ventor has no need to prove anything to anyone. He manages the drum parts excellently. Having that said, it’s slightly regrettable that the second half of the album lags a bit. 'Ghetto War' possesses a casual chorus with a fine melody, but it derails during the sluggish instrumental part. The soft beginning of 'Replicas of Life' should have been shortened. Adding calm vocals to emotional sequences has never been the strength of mom Petrozza’s son. Honestly speaking, one finds more details that could have been done in a better way. On the other hand, 'Slave Machinery' adds value to the work, 'Mind on Fire' scores with a flashy chorus and there is no obvious downer to find. That’s no matter of course on an album that clocks in after 56 minutes. In summary, Violent Revolution delivers a homogeneous load of adult thrash and it was, no doubt about it, a good start for Kreator into their new Mille-nium.

Playing thrash metal mostly on and off for over 25 years, Kreator is devoid of needing an in-depth introduction. I'd have to say however, that the 1990's version of the band didn't strike me very well. Renewal was not as I'd hoped for and the other few releases during that era didn't capture my attention. Coma of Souls was the only album from 1990 that I'd say still remains to be their best. Though after that, it didn't remind me of what the true Kreator really used to be like. Their first few releases including Endless Pain, Pleasure to Kill and Terrible Certainty were what the true German thrash metal releases the band strung forth. There might've been reasons with their record company and change in line-up that caused their downfall. Though they're back in full throttle once again, and Violent Revolution was a return to their thrash metal roots.

The music on here was melodic to the point of perfection. Their aim it seemed here that they achieved a level of success once again; and was more like the Coma of Souls of the new millennium. The first few tracks are the most memorable because of the musical rhythms by Mille Petrozza combined with Sami Yli-Sirnio's lead guitar riffs, making the songs sound more intriguing and interesting to listen to. However, the whole album features these kind of rhythm/lead combinations. The main rhythm guitar was very heavy, though all of the songs seemed to flow in perfect grace. The chorus of each track features some great moments, thus including the bridges. These highlights make the tracks very memorable. It isn't just monotonous, stale or bare musical outputs that was encompassed during the bands 1990's era.

Some tracks feature a few clean tone guitar parts as well as clean vocals. They didn't play them on all tracks, just brief points on a few songs. Soon thereafter would enter the heavy distorted guitar riffs. A good example would be on "Replicas of Life." It starts off with a clean guitar/vocal introduction then expands into a heavy yet once again melodic guitar melodies with heavy rhythm overtones. The first three tracks are the most memorable, though each song has key points that keeps you interested as a listener. Twelve tracks on here and clocking in at about sixty minutes in length, no thrash metal listener should keep Violent Revolution out of your ongoing Kreator collection. I would stress that you do listen to the first three tracks, as I previously mentioned.

The tempos of each song are varied. There aren't any tracks that are very fast, though the intensity is still exhibited. You could really hear a great deal of double kick drum parts along with slower ones. Everything seemed to flow well from that aspect. The focus here was not only intensity, but originality and melodic guitar overtures. Mille's vocal outputs were very intense. There were some moments to where he exhibited some screaming, especially during the bridge/chorus parts. A good example would be the track "Servant in Heaven - King in Hell." Everything seemed to mesh together in unison.

The only real bad points of the album is the flat production sound and the guitar solos. The mixing of instruments was well despite these shortcomings. There is no doubt that Kreator exhibits utmost talent as far as the rhythm/lead riff sections. But guitar solos aren't very well thought out. If they were better played, the album would deserve a higher rating altogether. Their previous lead guitarist Frank "Blackfire" Gosdzik shredded way harder than Sami Yli-Sirnio and Mille Petrozza in the solos category. It would've made the album to be near perfection if they were stronger from this aspect. Nevertheless, the rhythm/lead melodies make up for this mishap. They should've focused harder than they did with their solos as they did with their rhythms/melodies.

Kreator chose to focus once again on a variety of different issues in the lyrical department. That would include death, politics, religion, society, war and terrorism. These topics seem to be featured on pretty much all of their releases. However, they still are intelligent and interesting to read. They seem to think the lyrics out with an utmost effort. You can understand Mille's vocal outputs pretty well without even reading the lyrical sheets. Anyhow, they're still strong in this department so there are no complaints from this aspect. They don't usually do cover songs at all really. Everything is usually all of their original tracks.

Violent Revolution is a must to own if you favor thrash metal played with melodic parts to it. Kreator doesn't seem to copy any other bands' styles. This is a great comeback album of theirs which was extravagantly and elegantly played. It was really admirable and well executed. This album for me can be one that you can give it numerous spins without really getting sick of hearing it. Mille's vocals/rhythms, Sami's lead melodies, Christian's bass guitar parts and Ventor's drum outputs were very well played. It's really admirable that they decided to come back with more memorable thrash metal that was solely their trademark during their earlier days.