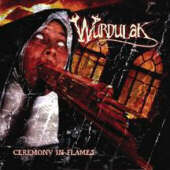 Type: Full-Length
Release Date: 2001
Label: Baphomet/Housecore Records
Genre: Black
1 At One With The Beast
2 Satanic Utopia
3 Cauterizing The Wounds Of Christ
4 Containment Of Inferno
5 Buried Beneath Perversion
6 Ceremony In Flames
7 Chosen Below
8 Gospels Of Depravity

It has to be destiny... a day earlier I was going through my vinyl collection and decided to take a shot at some old Celtic Frost epics to revisit old times and one more time witness the glory days of the underground and its beginnings. With a glass of beer in my hand and a tear in my eye I went back to times when I was young and beautiful... shit, now I’m only beautiful, but what does it have to do with Wurdulak? Well, let’s just say that if Celtic Frost was still alive and kicking like as with their first three albums (no comment on their latest ‘masterpieces’ – can’t use those words here) then they would probably sound very close to these guys.

But what could be good for Celtic Frost doesn’t necessarily mean it is for Wurdulak. Let me explain. Those seven guys, yes you read it right – seven, Iscariah (Immortal) on bass, Fug (Soul Forsaken), Ihizahg (Perished), Frediablo (Necrophagia/Gorelord) on guitars, Jehmod (Bloodthron) on Drums and Maniac (Mayhem) with Killjoy (Necrophagia/The Ravenous) handling vocals created something that their predecessors were able to do as a trio.

I don’t really care how many members are in the band but from three guitars and two vocals I would expect a scull-crushing wall of sound and to my disappointment it’s not the case here. Most of the time all three guitars are playing the same notes without taking this great opportunity to create some mind-blowing harmonies and if someone can tell me when one vocalist stops and second one starts I’ll be willing to pay money because both of them have identical vocals.

Don’t get me wrong; it’s not all that bad here. Wurdulak is not all about the Celtic Frost sound only and as most of today’s bands they add a touch of death and thrash guitars to make it more interesting. Quite they will often change of tempos from slow groovy poundings to blast beats that make “Ceremony In Flames” something more than just a lesson in metal history. So, if you are a fan of traditional, raw Norwegian black metal with good production, they might be your cup of tea.

And before I let you go, Wurdulak “Ceremony In Flames” is a debut release from Philip Anselmo and Killjoy’s new record label Baphomet/Housecore Records. I just thought you might want to know that.

Bottom Line: If you are into old Celtic Frost type of music, you might want to check it out. Personally, I’ll stick to the masters themselves.