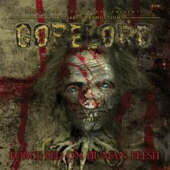 I guess these guys have too much free time. Wurdulak and Gorelord... not too often you get two CDs with the exact same members under different band name, but, thank God, with different music. Featuring Frediablo Prytz, performing all guitars and vocals, Jehmod on drums and guest vocalists Killjoy and Maniac, this Norwegian outfit can definitely make your head bang but without over-exaggerated enjoyment. Let me put it this way, instead of recording two more or less middle-of-the-road records they could’ve made one great disc by combining ideas from both products.

As the name of the band might suggest, what we have here is a gore-necro-death metal twisted around groovy searing riffs with ill vocals mixed with horror samples between the tracks. Doesn’t sound too original, does it? No, but a quite impressive number of great riffs, variety of rhythms and perfect production will keep fans of the gore-metal genre very content.

Spawned by gore and horror movies, the lyrics are just a pile of corpses, guts and everything you can imagine and I’m surprised the booklet just doesn’t drip blood.
I always look forward to the unhealthy and diseased imaginations of writers but I have to admit, Frediablo is one sick individual, and since most of us are you might find a tasty release in “Force Fed On Human Flesh”.

Main reason for taking off 2.5 points is lack of originality. Countless numbers of bands have already done it; horror themes, gore lyrics, scary pictures, warning labels… we’ve seen it before. Either, I’m getting used to it or “Force Fed On Human Flesh” didn’t have a huge terrifying effect on me, it didn’t even wet my hands... so that’s quite a long road to wetting my pants. Although, the dialog after ‘Dismembered Virgin Limbs’ with ‘...No, not the children, nooooo’ can cause a chill.

Bottom Line: The music is definitely the wheel that keeps this release rolling and if you’re still gore-hungry and the nearest cemetery is running short on corpses, Gorelord might satisfy your cravings.