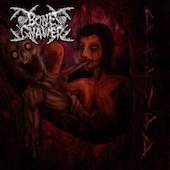 When the simplicity of a musical piece is its finest element, you know you have something tangible and memorable. Bone Gnawer has never skimped on the ugly side of death metal, but the latest EP, Carved, is about as sick as anything going, not to mention rife with some potent riffs and truly disgusting vocals and lyrics.

Kam Lee once again provides a tempestuous sprint through the valley of volatility as he belches his way through yet another Bone Gnawer slab of sickness. Proving once again why he's one of the legendary figures in the movement, Lee offers a disturbing narration of hacking, chopping and eviscerating that is sure to leave you somewhat disturbed, and if it doesn't then death metal isn't for you. What I have always liked about Lee is his lyrical approach that doesn't pine away for long diatribes with a nearby thesaurus; his 'short-and-sweet' approach is what makes the EP a piece of deadly brutality. “Leave Her to the Cleaver” is one of Lee's crowning achievements in a long and impressive career, proving that he is very much still viable and busy within the movement.

The battery is provided by Rogga Johansson on guitars and Eazy E on drums, and, as usual, the “Raging Swede” Rogga provides some of the sickest and thickest riffs in any death metal release. Also noted as one of the busiest men in the business, Johansson seems to have the Hell-blessed knack for creating some of the ugliest visuals within his chord structures. The great thing about this EP is the overall malevolence that seems to dwell in the underlying sounds of the music. You can't listen to “Carved” and not visualize some half-clothed female running down a darkened hallway as seen through the eyes of her pursuer, tripping over various debris and obstacles as she vainly attempts to escape her rabid would-be murderer. Part of the mental damage is when you hope she's caught, and you know damn well that she is....

The music Johansson and “E” provide is simply the perfect catalyst for Lee's insatiable thirst for bloody suffering; this is exactly what death metal is supposed to be. The .22 slug analogy applies: Enter quickly, rattle around and do infinite damage, then just drop and be done. When Lee screams, “Back to the butchery--/back for the kill--/back for the slaughter--/I'm back for the thrill--” in “Back to the Butchery” you can't help but believe him. The sickness in each of us, that wanton disregard for normalcy and convention, is a reasonable emotion when engaging something as potent as this in under 15-minutes of infestation.

This is one of the better piles of rotting stench-covered violence I've heard in a while, and I certainly hope for more. Carved is not easily digestible for the fringe kids on the outer skirts; this is true gore and alpha male horror put to music by three fine musicians whose only cares are that you are as innately disturbed after hearing it as they were creating it.