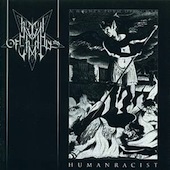 By the time this album was released in 2001, the second wave of black metal was well over it's peak. The style as it had been sketched out in Norway in the early 90's was rapidly evolving into different variations on the same theme, creating a microcosm of satanically inclined extreme music. Next to that, Cradle of Filth and Dimmu Borgir had broken through to the metal mainstream and as a reaction to that, the underground was brimming with bands who held on to the old traditions of hard and fast black metal. It's in this climate that we meet the main characters of this review, Reign Of Erebus.

The music on offer here is indeed fast and aggressive black metal, resembling acts like Marduk, Krieg, Dark Funeral or Antaeus. Fast tremolo picked riffing and raspy screaming vocals collide with the predominantly high velocity percussion, but it has to be said that the band has built in some variation by interspersing their music with slower parts as well. This approach to their music ensures that it does not devolve into a mush of distortion but provides the listener with some hooks that keep the songs interesting. There is a subtle influence of death metal in the riffing as well, the names of older acts such as Master or Possessed came to mind at times, and in its totality the music had me even thinking of Angelcorpse in places, which sounds cool as fuck, to be honest. The band primarily focuses on aggression, but here and there are dissonant melodies incorporated, giving the whole of the music a haunting, even chilling atmosphere at times.

The thing that really grabbed my attention on this album though, are the keyboards. In the wake of bands like Emperor and the aforementioned Cradle of Filth and Dimmu Borgir, a lot of black metal acts went with symphonic and orchestral/choral approaches regarding the use of synths, but Reign Of Erebus have chosen a different path here. Keyboardist Ewchymlaen provides swathes of industrialized sounds more found in hardcore techno (or gabba, if you will) which give the black metal on offer here quite a unique touch. This mixture works excellent and oozes aggression and menace, best exemplified on a track like 'Execution: Peace'. Besides that, it provides the band with a face of it's own as well.

The production fits the music well, but still leaves some to be desired. While the guitars, vocals and keys are clearly discernible and sound great, the drums sound kinda flat throughout the album. This coupled with the fact that the overall mix could have used a bit more bottom end, it hinders the music to really reach its impact to the fullest unfortunately.

This is a pretty cool black metal release that is well worth your time if you have any affinity for the genre. It has above average and well executed music and even somewhat of a face of its own. Those into the acts mentioned above should take notice, but fans of the more industrial tinged black metal acts such as Disiplin or Mysticum should also be able to find quite a lot of worth in this album.