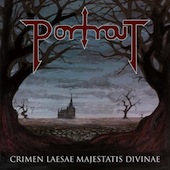 Crimen Laesae Majestatis Divinae, released in 2011, confirms an old finding anew. An expressive artwork is helpful. Portrait's second work shines with a picture that mirrors the general heavy metal approach (the barren landscape and the grey clouds), the unruliness of the compositions (the gnarled trees) and their occult touch (the church in the distance). It makes simple minds like me curious to discover the music of the Swedes and I guess that only an insignificant number of confused suckers will be disappointed when they do the same. Okay, this disc is not a breathtaking masterpiece, but a very solid, sometimes exciting full-length.

It seems as if one cannot write a review for this album without dropping the name Mercyful Fate and I admit that tracks like "Infinite Descension" have much in common with the material of the Danish legend. The complex structures, the aforementioned occult aura or the vocal style build a resilient bridge to the dominion of the King. But the opener, for example, does not flirt with the outputs of the pioneers from Copenhagen. "Beast of Fire" is, despite its duration of almost eight minutes, pretty straightforward. The double bass motivates the entire group and a speedy number with some melodic leads and an alarming chorus is the result. The song does not border on thrash, but the frontier is in sight. Great instrumental parts combine velocity with melody and the band proves its high level of energy right from the beginning. The tingling "Bloodbath" takes the same course and leaves a lively aroma, too. If we take a sober view, these tunes deliver nothing else but traditional metal which is presented in a very fresh and sometimes stirring form. I don't hate the sub genres, by no means, but at times it feels good to get back to the roots.

One could discuss whether the album suffers from a lack of compactness. Seven songs and a pretty mediocre intermezzo deliver the stuff for nearly 54 minutes. These numbers indicate an imbalance and unfortunately, they tell no lies. Some songs do not really come to the point and they also fail to create a dramatic or epic structure. Tunes like "Der Todesking" (what kind of German English is this?) have a small number of attractive sequences, but they are simply too long. The band strives for variety and adds a calm part. Nevertheless, it seems as if the level of heaviness and intensity remains more or less the same during the entire nine minutes. Furthermore, the guitar work is surely ambitious, but without outstanding riffs or leads. Maybe I am just too picky, but the less rapid tracks rather convince with their honesty than with compositional excellence. Either way, honesty marks an important feature and therefore Portrait's album belongs to these albums I do not want to miss. And I cherish the fact that the band acts passionately. The clear, often high-pitched and more or less melodic vocals illustrate this as well as the guitar work that avoids ordinary lines and banal leads intelligently.

In terms of the production, Portrait do not deliver any kind of weak points. The album sounds like a tradition-conscious album should sound: powerful, clearly defined and (not overly) aggressive - and its last highlight ("The Passion") is another track which is definitely worth discovering. So, let's confirm another old finding anew. Authenticity and coherence can be the compensation for little musical deficiencies, at least to a certain extent. Thus, I guess that every old school metal maniac can lend an ear to Crimen Laesae Majestatis Divinae.

If you could imagine Mercyful Fate’s early music with the vocals reminiscent of King Diamond on the lower register you’d have the perfect picture of Portrait (no puns intended). This is one of the more exciting bands to come around the metal movement in some time. Hailing from Sweden, Portrait exercises and extends its might and muscle accordingly in its second go-round titled Crimen Laesae Majestatis Divinae, which is quite the journey into a dark and empty chasm of evil.

While not as blatant or emphatic about the satanic side of life as the Danish counterparts, Portrait conveys a particular sense of reserved educating when it comes to the topical reverence with which they operate. As opposed to being too over-the-top or egregious, the band manages a typically early traditional feel that does wonders for the medium in this chosen fashion. While a million bands try, both successfully and unsuccessfully, to tap into the Venoms, Slayers and Bathorys of the world, very few even attempt Mercyful Fate and even less than that achieve any sort of validity in doing so. The only band rivaled as an equal and even worth mentioning in this vein is In Solitude, also from Sweden. Between these two bands the die is cast for a future in traditional evil metal music.

To the credit of Portrait they manage to channel the forces of early Fate but also keep true to their original ideas, and they have those in abundance. “Bloodbath” travels at a constricting light speed with some of the better guitar riffs I’ve heard from the traditional medium. What attracts me as well is the vocal melody that doesn’t stagnate into one pattern throughout each track and allows the music to let it carry the voice through the ears in direct opposition to over or under, which in this case would stultify it. The absolute perfection of the riffs and arrangements in these songs is amazing and lends credence to the assumption that this traditional style is still viable and wholly acceptable b the fickle masses. With a sharp production and massive attention to both the early 80’s sound and modernized ‘fullness’, Crimen… really drives home the new arrival of that wonderful traditionally evil metal that needs no pomp and circumstance to further its hallowed agenda.

The undeniable comparison to King Diamond is here throughout, and while Per Lengstedt doesn’t exactly pilfer Diamond’s legendary high-pitched falsetto he does enable a new generation to find total and subservient reverence in his delivery. In fact, and this might be sacrilege to say, I prefer this polished style that has a more lush tonal quality than the straight-shot one-dimensional effort King always gave. Hey, I go back with Mercyful Fate 28-years now and I love KD, so imagine how difficult it must be for me to say this. However, I’d rather pass the torch than see the style fade into eventual obscurity. Besides, Lengstedt has an almost Eric Adams feel to some of his higher registered vocalization, so the balance is certainly there, especially evident and honed to needle-point perfection in “The Nightcomers”, where the very core brilliance of Portrait shines through like a blacklight bulb.

This is a brilliant album from beginning to end, embracing and elevating all of the best elements of past glories and future accolades in one sitting. Metal Blade made a fine choice releasing this small piece of my past and a hungry current generation’s future.