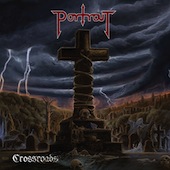 Welcome to our panel discussion. The subject today: "What's the real metal?" One section of the audience screams "Freewheel Burning", some very old guys squawk "Paranoid" and the group with the Moonblood shirts is just looking grim. Finally, four senile geezers in ridiculous costumes who called themselves "Kings of Metal" were refused access. However, there are good arguments to call Portrait's Crossroads real heavy metal. Why? Well, it does not have many features that indicate its belonging to a sub-genre. Instead, it is perfectly placed in the middle between death and hair "metal", thrash and hard rock, grindcore and progressive metal. Still better, it proves evidence that real metal has an inner strength that keeps the flame of this music burning without being dependent on additional elements.

Crossroads deserves attention, because it combines traditional elements with modern song patterns. The guitars create a relatively vehement sound without worshipping fury as a value in itself. The lead vocalist does not scream his heart out. He rather prefers a powerful yet comparatively melodic style. The songs do not lack drive, but most of them are not interested in entering the regions of speed metal. All these details seem to fail in order to give the music a fresh feeling, but the opposite is the case. Inter alia due to the exciting, mostly non-conservative but still comprehensible structures of the tunes, Crossroads emanates lively vibes. The energy of the long player is almost tangible.

This is no album that starts extremely strong and ends very weak. Portrait wait to open the secret compartment of their treasure chest until the sixth song. This does not mean that the somehow fleet-footed songs on the positions one to five lack quality. The circling opening riff of "Black Easter", for instance, shows that the group is able to form catchy sections. Nevertheless, "Ageless Rites" beats the previous material. Its slightly stomping configuration is combined with expressive leads right from the beginning. The strong vocal performance and the pretty dark leads generate an occult atmosphere. This song brings Steve Harris and Denner/Sherman together, but the vocals are less extreme than that of the Danish King. An almost playfully light instrumental section forms a counterweight to the generally dark mood and the more or less spooky chorus completes the picture. Anyway, the best is yet to come. "Our Roads Must Never Cross" is one of the songs on Crossroads that border on speed metal. (The other one is the swift "In Time" which is based on a very energetic approach.) Its comparatively straight pattern ensures that the track comes directly to the point and the impulsive bridge unleashes jolts of energy. I really recommend these two fantastic songs that represent the style of the album.

The production has a very natural touch. On the one hand, it does not lack heaviness, on the other hand it leaves room to breathe. Portrait did not produce an acoustic ton of bricks that buries the listener under itself. The generic sound matches the more or less archetypal musical approach. I wanted to give you more information, but excuse me, I have to get back to the panel discussion. What's going on here? The different groups celebrate a party together while the sound of Crossroads fills the room. This album, there can be no doubt, has brought them together, although the full-length does not deliver a grain of black metal. However, the dark aura of the songs has even convinced the Moonblood fans. Of course, they still look grim, but they seem to be lucky.