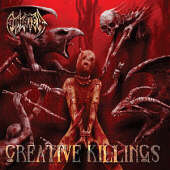 Starting in 1998, Sinister welcomed their first day as a death metal band. Signed to Nuclear Blast in 1991, the first of quite a few albums came out in 1992. Having a new record deal and CD in 2001, Sinister got a new singer: Rachel; but one thing remained: their faithfulness to what they do best; death metal.

Sinister delivers a death metal syringe that sticks to its original basics: heavy, raw, and brutal with the usual lethal weapons. Their music could be described as head banging, hectic and fast brutality. Don't let the first song 'Relic of Possession' throws you off by its ambient and acoustic melodic darkness because it's only an introduction to a very beastie and meaty death metal. Don't think either that the fact that the lead vocalist is named Rachel, will give a sweet or romantic feel to the compositions, because her voice is as deep and rough as any guy on the market. What you get is simply called good death metal done by excellent musicians. But simple music it is not. Fast, in constant evolution yes. Slow, doomier passages are also found on songs like 'Bleeding Towards the Wendigo' and 'Reviving the Dead.' Besides the usual great riffs, you'll get to hear some very weird ones on 'Early Gothic Horror.' For me the best song is the closing number 'Storm in my Mind.' Just the great solo of the intro is a real jaw dropper but they also added a frequent mode shifting in the progressive structure and a very scary vocal part, to close the opus.

Most of you are probably very familiar with one of the Holland’s most brutal death metal formation - Sinister. For some fans they are a cult band, one of the best of its kind. For others, it’s always a little short of getting to the top of the class and, with a little disappointment, I have to say that “Creative Killings” won’t help us break out from this deadlock one way or another.

In one sentence, their latest epic is a very, I repeat, very solid death metal album but something is missing here to make it great. To further explain my point, consider the fact that throughout the whole 36 minutes of fast and brutal music only one track, the title track, stuck in my head (can sing it in the shower).

I’m not saying that the rest of it was bad, but I have the feeling that there is too much of a good thing here. I never thought I would say something like that; I must be overworked! Each song has its moments, great riffs, drumming or interesting arrangements but in the end it all seems to melt together without leaving a lasting impression. If I listen to each song separately most of the time they just blow my mind off but as a whole, shoot me and I still won’t be able to tell you which track is which. All tracks seem to be written using a standard, good old template that doesn’t allow for any experiments or innovations and that’s probably the biggest flaw of this release.

Or maybe I’m concentrating too much on their new vocalist, Rachel; a female that can overshadow a good percentage of today’s growlers on death metal scene. Holy shit, you have to hear this to believe it. Where is she getting it from? And if that wasn’t enough I can see most of the male crowd holding their ‘jewels’ during the concert while having filthy thoughts rather than listening to the music. If she’s a death angel, I’m ready to go.

Bottom Line: Pure in-your-face death metal that will satisfy most of the fans of this genre. I’m just not sure if it’ll bring any new ones.