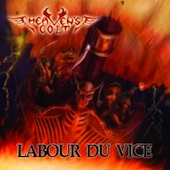 In the 80’s,I remember the more mainstream/commercial metal and hard rock. I liked it all to a point, because it lead me into a life and career that has span since them. When the scene collapsed because of many factors. It was time for it and it became the money and not the music. This is why I am skeptical towards the bands that revive the whole thing. Some are good; because they bring something new to it… others are just cartoonish and are less than entertaining.

Coming from France, Heaven’s Colt is an act that brings the nostalgia of the 80’s to today - all sung in French. Sounding like a totally direct cloning of such greats as AC/DC, Saxon, Airbourne and the whole glam thing, they truly do copy every note and riff from all of the greats, without being ashamed of it as they never change a single thing. No real progression has come, no evolution or anything – just using their hero’s music for their own. Simply put, they are just a tribute band faking it rather than a real act.

Each song has a riff closely ripped off from somewhere, like the AC/DC like "Labor Du Vice" or the full Kiss rip off of "Alcoola" shows a band that has no real talent to write original riffs. I have never heard such a blatant burglary of music in my life, and hope that this band gets nothing from their complete farce of an album other than dropped from their label and sued over and over again for copyright infringement from all the bands they have ‘borrowed’ from.

I cannot condone this sort of thing. If this band may have been a tribute band, this all would be a non-issue and they could go on their merry way, but because this sorry band are passing the music they make off as original it makes my stomach turn. My advice to Heaven’s Colt is to disband and they can all go work in the vineyards’ or digging graves. Copiers are one thing… musicians that see to ‘steal’ everything is a whole horse of a different color.